Spare us the ‘law and order’ hyperbole 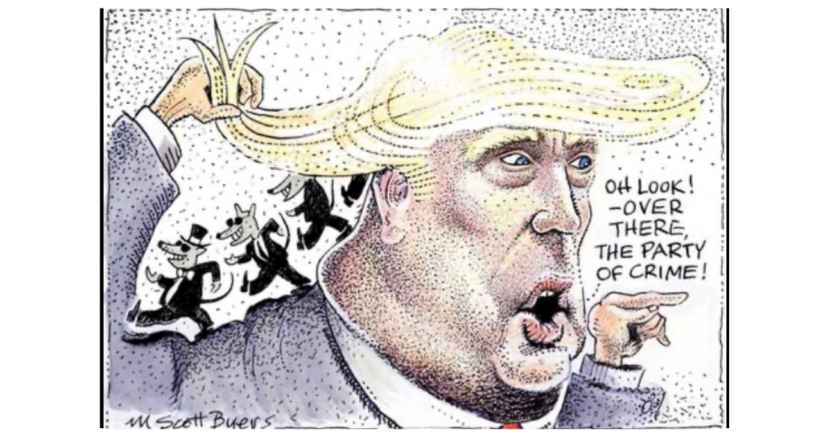 Glenn W. Smith
When political media and messaging become disconnected from the realities they purport to describe, our world becomes a far more dangerous place, whatever the motives of the messengers.

When the president of the United States promotes an extremist view that American cities are so dangerous they should be left to “rot,” as President Donald Trump did recently, it’s time to reconsider the political debates around policing and public safety.

Trump’s view is nothing new, of course. Back in 1964, Barry Goldwater, the Republican presidential candidate, spoke of “the degradation we see going on in the large cities of the East completely dominated by the Democratic Party.”

In a call-and-response across decades, Trump echoed Goldwater when he said, “The Democrats are truly the party of crime.” Speaking of crime parties, more than a dozen Trump aides, donors or advisers have been indicted or jailed. Truly.

Just the other day, the Wall Street Journal reported that a “homicide spike” was hitting the nation’s largest cities.

The Journal’s story included mention of Austin Police Chief Brian Manley’s June report that said Austin led the nation with a 64% increase in homicides the first six months of 2020 over the same period last year. Because Austin has so few homicides (all are tragic, of course) it took just nine to make a 64% spike for the more sensational headline.

Goldwater lost his election to President Lyndon Johnson in a landslide, in part due to the fact that LBJ upped the ante on “degradation” with his infamous “Daisy” TV ad attacking Goldwater’s willingness to use nuclear weapons. “These are the stakes,” a voice says in LBJ’s ad. “To make a world in which all of God’s children can live, or to go into the dark. We must either love each other, or we must die.”

It was no contest, LBJ’s warning of the end of the world versus Goldwater’s focus on street crime. Richard Nixon fared much better four years later with his “law-and-order” attacks on the Democratic nominee, Vice President Hubert Humphrey.

Today, activists on behalf of Black Lives Matter making humanitarian appeals to end police violence are called terrorists by Trump crony Rudy Giuliani and others on the right (a claim rated False by Politifact). For extra credit, Giuliani also called BLM Marxist, whatever he thinks his nonsense means to Americans of 2020.

Here’s the problem. We want to be safe from crime. We pay taxes to support law enforcement in their efforts to keep us safe. Exaggerated claims of danger do not keep us safer.

When political media and messaging become disconnected from the realities they purport to describe, our world becomes a far more dangerous place, whatever the motives of the messengers.

We might also note that Trump and Nixon, the loudest “law and order” presidents of recent decades, are also those who found it difficult to resist the personal temptations of lawlessness.

Beware the “law-and-order” hawkers. Their game is often like the old con in which a grifter pays a couple of shills to start a street fight, then picks the pockets of distracted onlookers.

Those claiming a desire to make the world safer might resist the impulse to deceive the very people they claim they want to protect. “Oh, what a tangled web we weave, when first we practice to deceive,” wrote Sir Walter Scott.