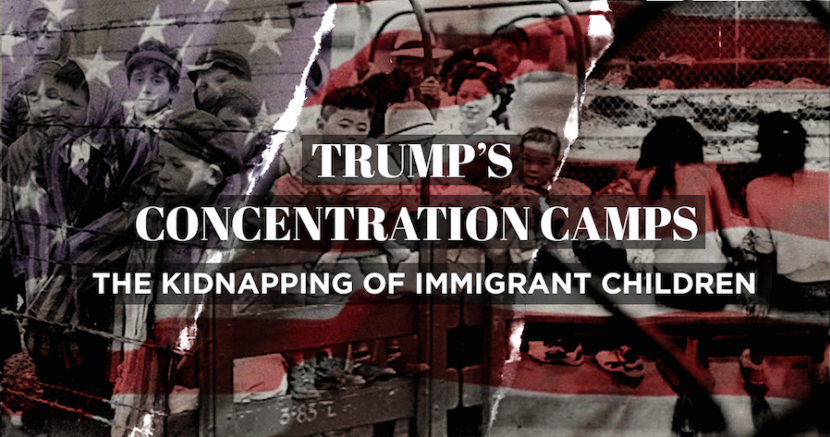 Silence of the Wolves

Donald Trump has begun a policy of kidnapping immigrant children from their mothers and fathers and placing them in internment camps. In Texas.

“But whoso shall offend one of these little ones which believe in me, it were better for him that a millstone were hanged about his neck, and that he were drowned in the depth of the sea.” Jesus said that. Gov. Greg Abbott and his fellow Republicans should listen to the advice.

As the world knows – and as religious leaders of all faiths have rightly condemned – Donald Trump has begun a policy of kidnapping immigrant children from their mothers and fathers and placing them in internment camps. In Texas.

You read that right. Concentration camps for children. In our state. There’s one in Brownsville, in an abandoned Walmart. They are also building a camp of tents in the desert sun outside El Paso.

Trump’s chief of staff, John Kelly, says the policy is intended to send a message to others fleeing violence and murder in Central and South America and coming to our border to seek asylum. Don’t come here, is the message. Trump is holding children hostage and demanding ransom from parents. “You can stay there and die, or come here and lose your children,” reads Trump’s ransom note.

U.S. House Speaker Paul Ryan and other Republicans are lying about a provision they say will prohibit the kidnapping. It’s in the more moderate of two pending immigration bills, they claim. But it’s not. What’s there is simply permissive language leaving the decision to ICE.

And through all of this, like the good followers they are, Abbott, Lt. Gov. Dan Patrick, Attorney General Ken Paxton and most other Texas Republicans are silent.

It should not be hard for Texas parents to think how they’d feel if government thugs snatched their children from their arms and sent them to internment camps.

The moral cowardice of those who refuse to speak out against this inhuman violence is appalling. This is happening in our country, in our state. Children are being kidnapped and held for ransom for ideological ends.

And, let’s be clear. These children are being snatched from mothers and fathers who arrive at our border and try to follow the legal procedures to seek asylum. They are allowed to cross the border – which they must do to apply for asylum – and then their kids are stolen from them.

Republican U.S. Senator John Cornyn appears to be the only statewide Republican official with the courage to stand against his policy. He deserves credit. U.S. Senator Ted Cruz defends the kidnapping of children.

These children will never forget the torture they’ve endured. We don’t need a pragmatic reason to condemn this practice, but here’s one anyway: This practice is going to produce haters of America. These children are with great justification going to hate us because of what we’ve done to them.

It’s enough that we plant such hate in the hearts of children. Jesus gets that right. And, if you aren’t moved by that, consider the potential consequences of that hate for yourself and your country.