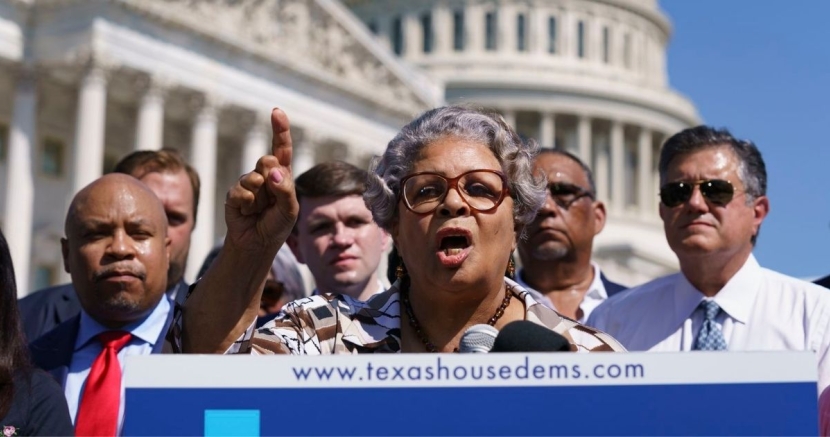 As Texas Republicans refuse to listen or negotiate, Texas Democrats have options for their next steps.

Texas Democrats made national news this week when they once again denied a quorum in the state legislature, preventing the Texas House from conducting business and thus preventing the passage of an egregious voter suppression bill.

So what happens next? Democrats have some options here.

In flying to D.C. to break quorum, Democrats are continuing their work in a different forum. Their presence expresses urgency to President Biden, Senator Schumer, and Speaker Pelosi to use their majorities to pass federal voting rights legislation.

This is bigger than just Texas, because what we're seeing in the Lone Star State is what we also saw in state legislative chambers around the country - Donald Trump's claim that he lost the election due to unsubstantiated voter fraud, also known as "The Big Lie," has become the basis for voter suppression laws around the country.

Things like limiting the number of polling places in cities but not in rural areas, limiting access to vote by mail, limiting voting hours, criminalizing clerical errors on voter registration cards, allowing judges to overturn elections simply based on claims and not evidence, and empowering partisan poll watchers to interfere with balloting are some of the more egregious efforts in these bills.

Democrats must use their national leverage to protect our free and fair elections, and neither Donald Trump nor state legislatures should be allowed to stifle those elections.

Republicans refused to listen to the hundreds of Texans who testified against their voter suppression bills, and they refused to negotiate w/ Democrats.

Republicans left no choice. Dems had to leave the state and break quorum to defend our democracy. #txlege #SuppressionSession pic.twitter.com/9EULyAoQPO

A special session is 30 days and running out the clock on that is quite doable. In delaying the special, Democrats are not just slowing down the voter suppression bill, but also dangerous proposals to ban medication abortion, attack trans kids, curtail Diversity, Equity, & Inclusion education, and much more.

Yes, Gov. Abbott has said that he will keep calling special sessions, but there's a problem with his threat: he vetoed funding for the state legislature - which also includes the Republican majority.

When payroll runs out on September 1st, it runs out for everyone's staff regardless of party. So will Republicans still be under a form of Stockholm Syndrome in defending the governor's unconstitutional and heavy-handed tactic when staff paychecks dry up? He's really painted himself into a corner here. Time will tell, but whether you’re on team red or team blue, you still need that green.

Legislative staff sued the governor over his veto in June, and that case is before the Texas Supreme Court. If the court agrees that the move to defund a branch of government is unconstitutional, this issue could be completely resolved without the governor's input.

Thus far, Republicans have refused to listen or negotiate. The voter suppression bills passed out of committees on a party line vote, regardless of the hundreds of people who showed up to express concerns. This is similar to how the bills were rammed through in the regular session.

If Republicans are so eager for Democrats to come back, then they should be similarly eager to negotiate on the contents of the bill. Otherwise, what's the point? Democrats are under no obligation to show up and get rolled, thus the quorum break and national spotlight are one of the few remaining tools in their toolbox.

Democrats upped the ante because they had to, not because they wanted to. They are in DC now making their case and making national headlines on why this matters. That's a powerful message and it's a powerful position to be in, much more so than staying home and letting this all pass without resistance.

This is the scenario that many Republicans jump to right away, but it misses a major point - if nothing was going to change in the first place, then it proves the point that “Republicans refuse to listen or negotiate.”

House Dems were smart to use the opportunity to make a big play and draw attention to a critical issue.

Which then brings up another question - what incentive did Republicans give Democrats to NOT go for the big play? The answer: very little.

THE LONGER THIS GOES ON, THE WORSE IT IS FOR ABBOTT

Gov. Abbott is a political animal who governs not from a set ideology but from a set of polls; he'll do whatever it takes to consolidate his Republican base. That's because for years that was the path to victory in Texas, though that has been eroding significantly over the years.

We’re basically being governed by a child, making demands along the lines of King Joffrey.

In the meantime, things aren’t looking too good for Abbott. For the first time in his tenure, has at least two Republican primary challengers from his right and a growing distrust from the independent voters in the middle. This comes as the governor bungled the state's COVID response, refuses to make the energy grid a legislative priority, or to take up Medicaid expansion.