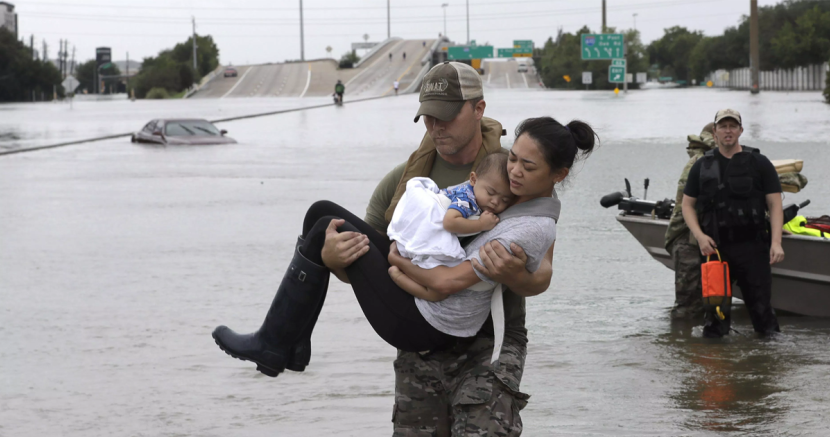 First, we save lives.

That’s what people of good will do if they gain power or new leverage over the current leadership in Washington, D.C. and Austin.

We move to save lives, and the “we” is meant to be as inclusive as it can be. People of good will come from all walks of life. During Hurricane Harvey, did you think once about the politics of the woman carrying your 90-year-old grandfather to safety through waist-high floodwaters?

The need is real. In the United States, life expectancy is falling and the rate of premature death is rising. Our school children are forced to forget about tomorrow’s pop test and worry about the pop of deadly weapons in their school corridors. That should be enough to wake us up.

You’d better wake up. “The life you save may be your own,” as a National Highway Safety slogan once put it. In a second ad, actor James Dean joked, “The life you save might be mine.” The joke’s poignant given Dean’s later death in an automobile crash.

Some of our confusion can be forgiven. There’s a fog of political war around us today. We don’t know where to turn, and we’ve lost some trust in those who claim they do.

So, like townsfolk stumbling upon wearied battlefield wounded in a war not really of their making, we need to do first what we can do: help the wounded and those at risk.

I asked advice of some the brightest people here and around the country who have given serious thought to how we meet these challenges. There is a remarkable consistency to their responses. Here are some examples.

Let’s start with things we can do immediately to address urgent needs.

First on the list: gun safety. Can we begin to tame our out-of-control culture of violence, which, when you think about it, is what the Second Amendment is there to protect us from, not promote? Universal background checks would be a good start. We should drop the political habit of passing new laws — campus carry, for instance — to promote gun sales over public safety.

Another simple, life-saving step: protect the nutrition assistance program (also known as SNAP or food stamps) that serves millions of children in poverty. Some in Congress have targeted it for cuts. If our kids have to worry about getting shot, do we have to starve them at the same time?

My sources seemed to agree that it’s the children who must first be saved. And this includes young, low-level offenders caught in the soul-grinding gloom of the prison-industrial complex. They aren’t locked up to keep us safer. They’re kept there to make somebody money.

We should reverse the Trump administration’s assault on health care. It’s raising insurance premiums and locking many out of doctors’ offices and hospitals. Also, the rise in maternal mortality rates shames us all. Do what it takes to protect women’s health care, which is under a brutal, focused attack.

Let’s recognize the so-called Dreamers as the Americans they are, removing the threat of deportation for those brought to this country as children. Can we then pass new immigrant labor laws so workers who come here to fill jobs no one else wants can be treated with dignity?On to more politically challenging initiatives.

Let’s repeal the corporate tax giveaway and use the $1 trillion-plus we regain to create hundreds of thousands of jobs to repair our roads, bridges, seaports, water systems, and other life-giving and life-saving infrastructure.

Then, the townspeople are going to have to save the town. The debasing of democratic institutions for partisan advantage has weakened our democracy and cost us faith in government. Let’s pass a constitutional amendment ending the power of money in campaigns and the influence of lobbyists.

This is how we save lives. And maybe save America.