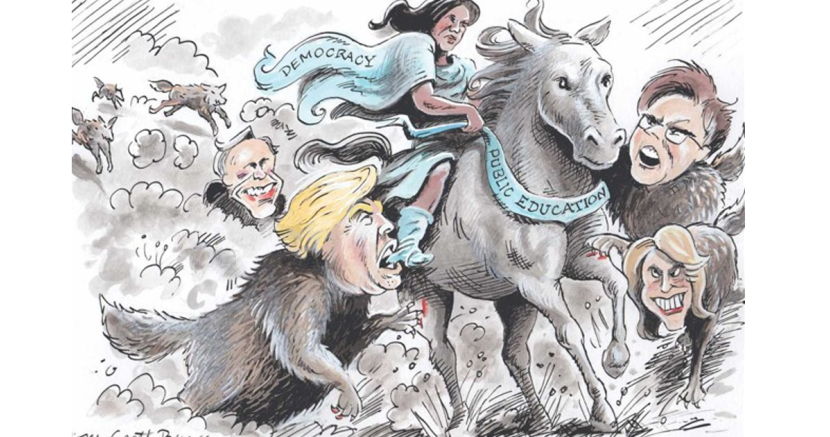 The sad ABCs of the Texas’ A-F school ratings

Scott Byers
The leadership of the Republican Party in Texas and around the country is hell-bent on ending public education as we know it and replacing it with private corporations that will get rich on our tax dollars while educating fewer of our children.

The dream of a universally educated citizenry will be killed in a premeditated attack on perhaps the most important institution of democracy there is. In fact, its importance to democracy is one reason why the authoritarian-minded want to kill it.

There are other reasons. Many may wonder how the Christian Right can ally itself with Donald Trump, his greed-soaked Education Secretary Betsy DeVos and other school privatizers. The equation is simple enough: The rich get richer, and the Right gets public tax dollars for private, fundamentalist schools.

Children in public schools will, over time, receive fewer and fewer resources and fall further and further behind. Then, there will come a moment when the underfunded public education system perishes like a starved prisoner in a forgotten cell.

The state recently released its latest version of school ratings, this one called A-F report cards. The “simplified” ratings are used, it seems, so Texas parents — already victims of underfunded public schools — have a shot at remembering what A and F grades mean.

Such ratings are sold to us on the premise of increased accountability. Instead, they used to destroy confidence in public schools to advance the cause of publicly funded private schools.

Think for a moment of all the time and money spent on questionable standardized testing and the casting of dark bureaucratic spells — I mean development of ratings systems — upon public education. Think of the anguish of educators and students who are sentenced to Dr. Standardized’s Hamster Wheel Test of Accountability.

Now, imagine if you can that all that time and money was spent on educating our public schoolchildren instead of on the purchase of great barrels of ink to paint scarlet F’s on schoolhouse doors. Why, gosh and golly, maybe all our schools would get A’s and B’s.

There’s not enough blunt talk about our imperiled education system. Texas public school educators try hard to persuade policymakers. Still, too many settle for gruel out of fear of further retribution state officials.

What kind of retribution could make things worse? What could the governor and his GOP-controlled Legislature do? Send them like so many Oliver Twists to Mr. Sowerberry for saying, “Please, sir, I want some more?” They should remember that even Oliver’s story ends happily.

The assault on public education has had the success it’s had because too many folks don’t want to believe it’s happening. They think public schools will always be there — the way sparkling clean water always comes out of faucets. Well, ask the people of Flint, Michigan, about the water coming from their faucets.

If we look carefully, we might find that the efforts of the privatizers to embarrass public education sometimes backfire. Let’s put two facts back to back

Looky there on the blackboard: Charter schools, treated lavishly by the state, don’t quite pass on that lavish treatment to our children’s education.

Adding a profit motive to public education does not lead to better performance; we pay more for less. That doesn’t make that much difference when we’re talking about our socks costing more and wearing out sooner than they should.

It makes a great difference when it means our children aren’t educated well enough to land jobs good enough to afford socks in the first place.