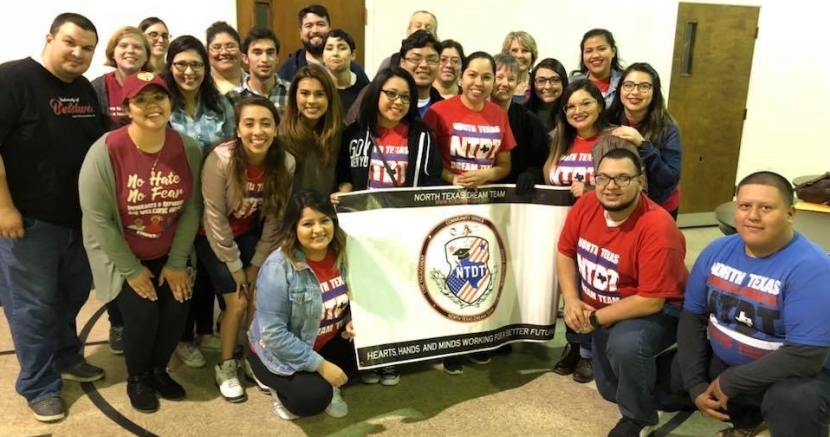 Tori Falcon
Immigration organizing has led to a tipping point in the DFW area for 2020.

In recent elections, North Texans have seen their results trend more and more blue. And when it comes to immigrant rights, there’s a small yet powerful pool of people leading this hefty conversation in Dallas and Fort Worth.

Although there have been countless people advocating in our community, North Texas has been catching up to other metro areas across the state when it comes to organizing.

As we reach the peak of this election cycle, several groups like the North Texas Dream Team have been organizing their communities for years and know that North Texas is key to creating change for progressive politics across the state in 2020.

North Texas Dream Team (NTDT) started organizing in 2009, but it wasn’t until 2010 they decided to put a name to the work they had been doing. NTDT is a nonprofit immigrant youth-led group doing work surrounding immigrant issues and rights across the region.

Communications Manager Angela Andrade said NTDT started because the group of organizers were becoming frustrated dealing with the respectability politics of other organizations for Latinx people. Andrade said they would implore organizations to support the Dream Act in 2009, but were told this was “too political” or “not the right time.” Regardless, NTDT lead several important efforts in the area including administration relief under Obama’s presidency, funding DACA renewals and conversations against Senate Bill 4’s placement and hopeful removal.

“We decided, you know what, let’s just do some research of our own,” Andrade said. “We started doing research about the Civil Rights Movement and [tactics] that have already been done in the past. Apparently it hadn’t been going on in North Texas. People weren’t [using these tactics]. They weren’t shutting down senator’s offices. They weren’t doing die-ins.”

Since Donald Trump’s inauguration, Andrade said a lot of immigrant issues that had been happening for years came into the light. This led to more people than ever reaching out to NTDT.

"It has definitely brought us organizers together,” Andrade said. “We started participating in training and started reaching out and telling the truth to people."It has been really empowering seeing other organizers doing the same work and us having video conferences [...] kind of just sharing what we've done with each other."

This rise of resistance and political interest has allowed the organizations in North Texas to rely on each other to lighten the load and share resources.

After 10 years doing this work in North Texas, NTDT has become one of the most trusted organizations in the area for assistance in immigrant issues. Andrade said when a raid happens in the area, people are not calling national organizations, they are phoning NTDT.

"We have always been seen, because we started so young, [known] as the kids who don't compromise," Andrade said. "Here we are in 2019 and we have helped nearly 9,000 DACA recipients, all [through] volunteer-led [workshops].”

The work has been non-stop, but Andrade said recently the team took a moment to reflect on the changes made and the ideals they have pushed which have forced North Texas in a more progressive direction.

Andrade noted how if NTDT is going to have an event, no less than 100 people are going to show up. When NTDT got notice of someone approving a raid, with their numbers they were able to set a meeting less than a day later with this person.

"This is how you change policies when you are able to have the community power," Andrade said. “To have that support, that following and that trust, that trust is so extremely important."

So, what exactly is working when it comes to organizing for immigrant rights in North Texas? Andrade said it is first and foremost storytelling.

"The way we have been able to shift minds and hearts is with our story [...] You can't deny someone's story, someone's truth, someone's experience," Andrade said.

Storytelling, combined with training programs. From youth engagement training which helps young students of color learn not fall into tokenism when becoming involved with an organization, ally training meant to teach allies to not adopt a savior complex, and everything in between, the organization is improving how North Texas can better help its immigrant population.

"NTDT really puts our community first and people who are allies, who are citizens, are willing to put their lives on the line as well,” Andrade said. “Our liberation is bound in each others.”

For 2020, it’s all about ensuring that eligible North Texans cast their ballots.

NTDT has been shifting North Texas culture for 10 years and it shows in the language being used and the people utilizing its resources.

“It's surreal and gives us a lot of hope especially coming into 2020, because we are going into [public] spaces,” Andrade said. “People have asked us ‘how can we help?’”

Based on Andrade’s advice, there’s a handful of things we can be doing to help build progressive community power.

If you want to get involved in building your community: invite organizations to your church or neighborhood gathering and listen to community members share their stories. Understand and know that the things that you do, vote on, and candidates you support impact families across the DFW area and state.

The culture of North Texas is shifting and it is groups like NTDT which are pushing the needle toward progressive values.