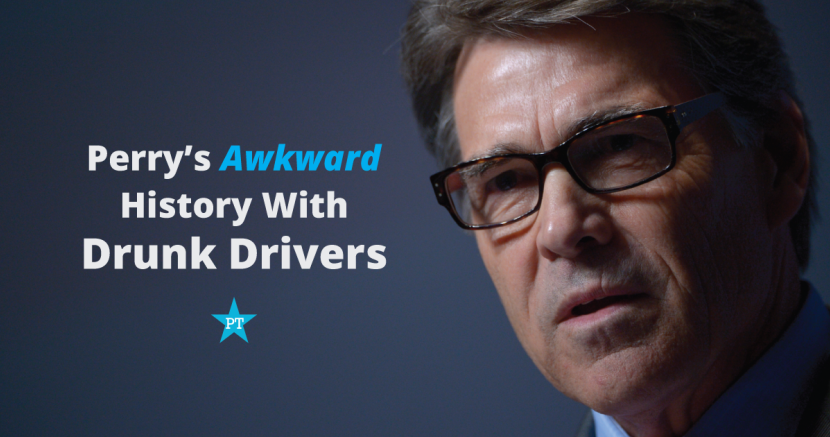 Rick Perry is defending his attempt to coerce Travis County District Attorney Rosemary Lehmberg out of office—an attempt which resulted in not one, but two indictment charges—by claiming that he was taking a stance against her drunk driving conviction. However, a look at the Governor's history with Republican officials charged with drunk driving undermines his case.

While it's true that Rosemary Lehmberg drove drunk, and that her actions following the arrest are indefensible, it's also true that she went through the legal process, saw a judge, and served time. But this wasn't good enough for Rick Perry as he sought to force her from office.

This becomes highly suspect upon review of the Governor's previous treatment of public officials charged with drunk driving— treatment which includes looking the other way entirely, and allowing one official to rise in rank.

Then, there are officials who held identical offices as Rosemary Lehmberg. Since Perry has taken office, two other District Attorneys have been charged with drunk driving, but Rick Perry made no calls for their resignation.

What's the difference between these District Attorneys and the Travis County District Attorney? It could be that they are Republicans. More likely, it's that these district attorneys were not overseeing investigations of the governor’s signature project – the Cancer Research Fund – which has since resulted in a felony indictment.

Had the Travis County D.A. heeded the governor's call and resigned, it would have conveniently been up to Rick Perry to appoint her successor, the person who would – or more likely would not – continue investigations into his projects.

The bottom line is that Rick Perry saw Lehmberg's drunk driving charge as an opportunity to get rid of her and her active investigation into the Cancer Research Fund scandal.

In doing so, Rick Perry chose to use the powers of his office to act as judge and jury - and now he has to explain himself to a real judge and jury.