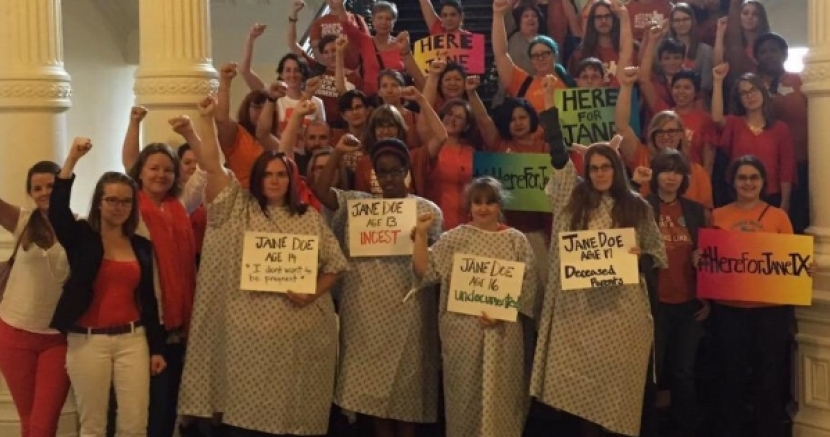 Republicans in the Texas legislature spent the long weekend pushing cruel legislation—by any means necessary—that would place more barriers in between vulnerable Texans and their access to abortion care. These politicians have proven time and time again that they will stop at nothing to restrict abortion access.

On Monday, Republicans—and one Democrat, Sen. Eddie Lucio—passed an omnibus anti-abortion bill that would make it nearly impossible for teen victims of abuse, abandonment, and neglect to access abortion. Lieutenant Governor Dan Patrick—in an unprecedented move that directly contravened Senate rules of procedure—let the debate on HB 3994 proceed by overruling a valid procedural challenge raised against the bill by Sen. Royce West. After nearly four hours of debate spearheaded by Senate Democrats Sylvia Garcia, Kirk Watson, Jose Rodriguez, and Jose Menedez, who proposed more than a dozen amendments aimed at curbing the harm caused by the bill, HB 3994 cleared the Senate by a vote of 21-10. The bill will return to the House for approval this week.

Under Texas current law, which was passed by Republicans in 1999 and signed by then Gov. George Bush, when an abused or neglected teen doesn't have a parent they can turn to for consent, they can go to court to get authorization for an abortion from a judge. Though by all accounts this rarely-used, judicial bypass process has worked well for the last 15 years to protect the interests of Texas’ most vulnerable teens, HB 3994—a bill that is “rife with constitutional problems”—is designed to put this process out of reach.

In addition to eliminating sexual, physical, or emotional abuse as specific grounds for granting a bypass, HB 3994 raises the burden a proof placed on these abused and neglected teens, delays or blocks access to care by prolonging the deadline for bypass rulings, and jeopardizes confidentiality by requiring a teen to file in her home county unless it has a population under 10,000. Though HB 3994 no longer requires that all women present a valid government ID to access abortion, if a woman does not have an ID, physicians could perform an abortion, but must subject themselves to liability by reporting it to the Department of State Health Services.

Tea Party Rep. Jonathan Stickland filed an amendment that would ban abortion in cases where it is discovered after 20 weeks that a fetus has a severe fetal abnormality and will not survive outside the womb. Using the devastation of vulnerable Texas families as leverage, Rep. Stickland threatened to put this despicable amendment to a vote unless the House moved forward with SB 575, a bill that was languishing in committee and would ban insurance coverage for abortion.

After striking a deal with House State Affairs Committee Chairman Byron Cook, who publicly opposed another severe fetal abnormality amendment ban amendment earlier this session, SB 575 was voted out of committee, and Rep. Stickland withdrew his abhorrent amendment. However, in a surprisingly bipartisan move, the House Calendars Committee voted down adding SB 575 to the schedule of floor debate.

As the deadline to set bills for floor debate passed, SB 575 was considered dead. Undeterred, Rep. Stickland upped his bullying tactics to the point of threatening physical assault, and though he got thrown out the chamber, he managed to revive SB 575.

In another unprecedented move, as their deadline had passed and the House had adjourned, the Calendars Committee, in the absence of the Democrats and two Republicans who voted against SB 575, re-voted to set SB 575 for floor debate.