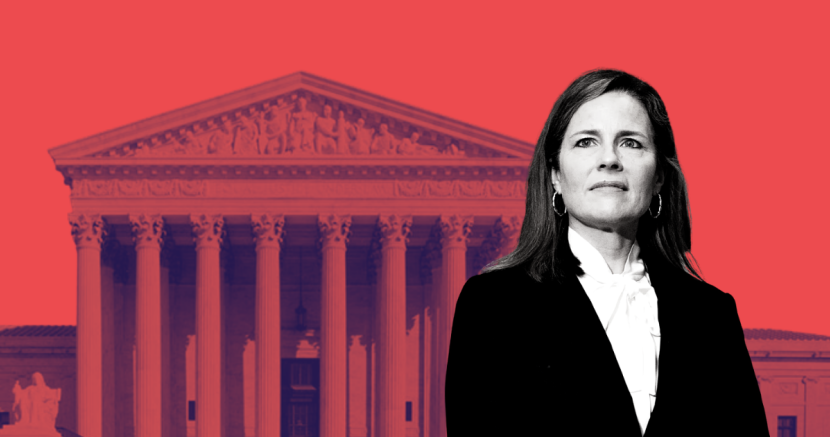 Progress Texas
With Amy Coney Barrett, the Supreme Court now has a 6-3 majority going into cases on the Affordable Care Act, the 2020 Census, and same-sex adoption.

Despite an election being days away and millions of ballots already cast, the Senate GOP has confirmed Amy Coney Barrett to the Supreme Court. In one of the fastest SCOTUS proceedings in history, Barrett’s highly politicized confirmation has been cemented. Now, a 6-3 conservative majority rules our nation’s highest court.

With Barrett’s confirmation, now five of the nine justices on the Supreme Court have been appointed by Republican presidents who lost the popular vote. In just one term, Trump was able to remake the Court by appointing three judges.

But that’s no accident. This is the product of years of state and federal GOP court-packing. It has long been a conservative priority to take control of the court system. It’s why they would rather confirm Barrett than pass a COVID relief bill. It’s why they prevented the nomination of Merrick Garland and dozens of other federal judgeships under Barack Obama. It’s why they spend millions of dollars in dark money on judicial nominations.

Freshly appointed and having taken over the chambers of Justice Ruth Bader Ginsburg, Barrett will soon begin to hear cases. Here’s a look at some upcoming cases and how Barrett may impact their outcomes.

Just one week after election day, SCOTUS is slated to hear one of the most anticipated cases, California v. Texas. Texas Republicans are leading this latest effort to overturn the Affordable Care Act, despite the fact that we’re in the middle of a global pandemic.

Barrett has already made her feelings on ACA clear. As a law professor, she heavily criticized Chief John Roberts’ decision to save the individual mandate portion. It was his vote that saved ACA in a 5-4 ruling. Her criticism was a major part of her confirmation hearings, where she denied, “being on a mission to destroy the Affordable Care Act.”

But her textualist defense of dissenters in ACA is a cornerstone of her jurisprudence. She openly stood firmly by her mentor, the late Justice Scalia, in his opinion that the ACA was unconstitutional in the first case.

This census case is just the latest of Trump’s blatant attempts to strengthen the GOP through reapportionment. If Trump is successful in this case, it would strip these undocumented Texans of representation in their congressional districts. The result would likely be reducing the seats of states like Texas and California, where the immigrant population is high. It would also directly affect the Electoral College, as reapportionment determines the number of votes states get. Additionally, a lower census count could take away millions in federal funding that our state receives for things like health care, education, infrastructure and more.

The last census case was a 5-4 opinion, with Chief Justice Roberts joining the liberals. But now with Barrett in Ginsburg’s seat, she could be the deciding vote.

On the day after the election, the Court will hear if a Philadelphia Catholic nonprofit can reject same-sex foster parents under the Free Exercise clause. The case, Fulton v. City of Philadelphia, is a challenge to a nonprofit, Catholic Social Service, and their refusal to allow same-sex couples to become foster parents in their program.

Barrett has repeatedly said that she will not let her own religious views impact her jurisprudence, but Barrett has a past history of anti-LGBTQIA+ stances. She defended the dissenters in Obergefell, the case which guaranteed marriage equality. She misgendered trans woman and questioned if trans people have protections under Title IX.

Notably, in her time serving as a board member for private Christian schools, the schools denied admission to children with same-sex parents and discouraged open LGBTQIA+ teachers. The policies were in place before and during the time Barrett served on the board of Trinity Schools Inc. Former students and employees of the schools have said the school community teaches that homosexuality is a sin and marriage should only be between a man and woman.

This past June, SCOTUS ruled 6-3 to say that Title VII protects LGBTQIA+ employees from sex discrimination. But it did so with Ginsburg. In the light of opinions this month by Justice Thomas joined by Justice Thomas suggesting they were open to overturning Obergefell, it’s clear that the Court is nowhere near the same make-up that has helped recent progressive victories.

While the GOP got what they wanted with Barrett’s nomination, it’s not too late. There are still major opportunities to reform the courts to ensure more equality. But to do so, we need to win the presidency for Biden and turn other vital seats blue. To help ensure the future of the courts, head to GoVoteTexas.org to make your vote heard.