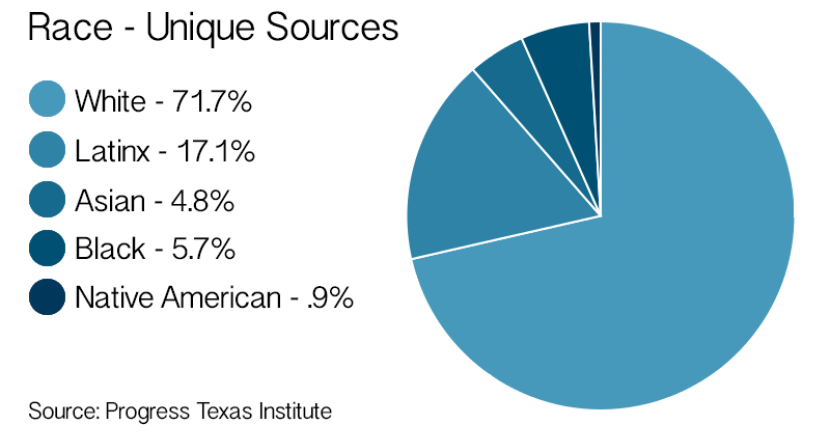 Texans deserve their diverse viewpoints and backgrounds represented in the news they consume.

Although our state is one of the most diverse in the country, political news coverage of Texas is anything but.

In our new report, “Texas Media Coverage Lacks Diverse Sources of Political Analysis in 2020 Election Coverage,” we found that during the 2020 U.S. Senate primary, Black, Indigenous, People of Color (BIPOC) and women-identifying political sources were rarely quoted by large Texas papers, leaving out the important perspectives of millions of Texans.

In 2015, we conducted a similar study based on the 2014 election. In that report, we found that Texas media almost exclusively interviewed the same seven political experts. Quoted hundreds of times, these political scientists were all white, male, and from urban areas of Texas. Since that time, we have been encouraged by reports from news organizations that have also reflected on their own coverage, in particular these posts from Austin’s NPR affiliate KUT, as well as the Texas Tribune. We took this up again in the 2020 primary so as to offer a mid-cycle analysis, in hopes of encouraging more diversity in sources heading for the November election.

Our analysis of news coverage during the 2020 Senate primary found that 71.7% of quoted political sources were white and 71.7% were male. Black sources were only quoted six times, and only once in a major Texas outlet. We also found a lack of representation from Latinx, Asian, and female sources, showing that white and male voices are still overrepresented in the political news we consume. 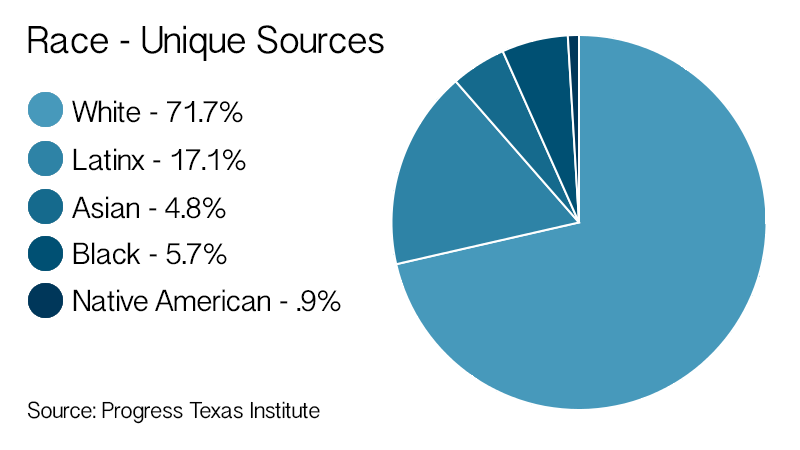 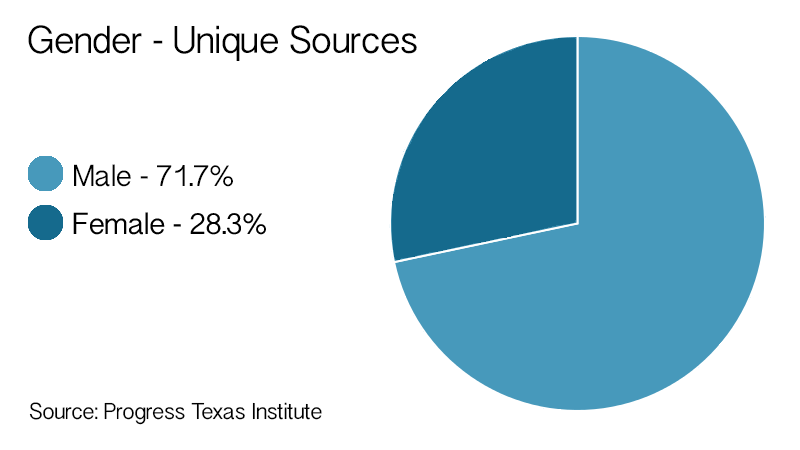 Texas is a diverse state with vibrant communities — we are 40% Latinx, 13% Black, 5% Asian, and 50% female. With Texas politics becoming more diverse than ever before, it’s inexcusable that Texas journalists continue to include mostly white and male voices in their political reporting.

To arrive at these results, Progress Texas Institute used media tracking software and relevant search keywords to locate each English-language article about the 2020 Senate primary from November 9, 2019 to March 8, 2020, the opening of filing to the date of the primary election. We then manually sorted through each article, arriving at 107 unique instances of a quoted political source. These included, but were not limited to, political science professors, activists, legislators, pollsters, consultants, and others working in politics in some way. Senate candidates or their representatives, as well as prepared statements, were not included in the data.

Using data from social media and other internet platforms, we found the approximate race, age, and gender of each quoted source. Progress Texas Institute also made an effort to reach out to each quoted source to confirm their demographics.

The results are clear — Texas media must seek out more diverse voices. It is alarming that we found only one major Texas outlet that interviewed a Black political source about the U.S. Senate race, and it is disappointing that BIPOC and non-male voices are still underrepresented in the media. All Texans deserve to see their perspectives represented. As we approach Election Day in November, we hope that Texas journalists make an effort to include more women, people of color, and LGBTQIA+ Texans in their political reporting.

Progress Texas Institute is committed to uplifting underrepresented voices in our community. We offer media training and media support to those working in politics and interested in speaking to journalists on the record. If you are a woman, person of color, or member of the LGBTQIA+ community interested in working with media (or know someone who is) and would like to learn more, reach out to us at info@progresstexas.org.