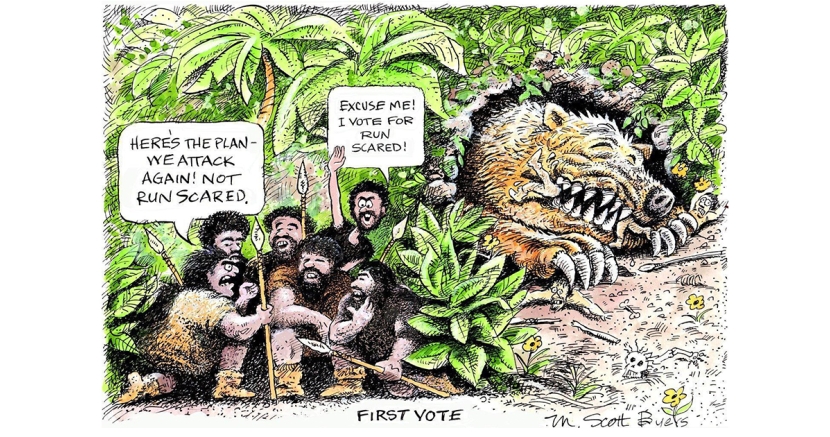 There’s no lack of passion in our politics these days. Still, for all our political intensity, do we share an understanding of the role of individual choice – of voting – in our lives and human history?

Did you know, for instance, that democratic practices like voting and term limits were present among nomadic hunter-gatherers? Subsequently, in various forms such practices can be found in ancient Mesopotamia, India, China and Greece.

Anthropologist Christopher Boehm said that humans as long ago as 40,000 years formed egalitarian practices to curb authoritarian abuses. “It was not Americans, two centuries ago, who invented this interesting political way of life; nor was it the Athenians of Ancient Greece.”

Voting, it seems, ranks right up there with Love and Fire as a key contributor to human evolution and history. Love allowed us to work together, in sympathy with others. Fire lit our nights, kept predators at bay, broadened human diet.

Voting, the exercise of individual choice in group decision-making, allows us to balance a natural human impulse to hierarchy with our more egalitarian visions.

As Boehm says, when bully leaders rise to power, “so does the moral community: it unites against those who would usurp the egalitarian order...This scenario is true not only of hunting bands and egalitarian tribes, but also of ancient and modern democracies in which anti-authoritarian checks and balances become formally structured.”

We should regard our right to vote with the same reverence with which we regard our right to love or to live in the warmth and protection of the hearth. Of course, some would restrict who we may love and deny many access to a warm hearth and healthy food.

Authoritarians regard voting as a privilege reserved for the few, almost always the “few” they happen to belong with. American history is the history of the expansion of voting rights, but it is also the history of the denial of those rights by various legal and illegal voter suppression efforts. The authoritarians identify those they assume will oppose them and seek to disenfranchise them rather than persuade them.

We should drop every barricade against true universal suffrage. Make voting day a holiday and expand use of mail ballots and early voting. Election “red-lining” of areas – for instance, denying sufficient voting places and machines in minority areas – should be outlawed.

Other voter suppression tools like the purging of qualified and legally registered voters from the rolls using bureaucratic tricks should be punishable by civil and criminal law.

When the new census is ready, Texas and other states will redraw district lines for a variety of offices. This allows politicians to choose their voters instead of voters choosing their politicians. The resulting imbalances contribute to polarization and stagnation. We need redistricting reform.

Our hunter-gatherer ancestors treated democratic practices with reverence. They knew what they might lose through apathy or inattention, and they were ready to toss out bully leaders who inhibited individual opportunity and social cohesion. For them, voting was as magical as Love and Fire.