Raising the Minimum Wage Is a Women’s Equality Issue. Here’s Why. 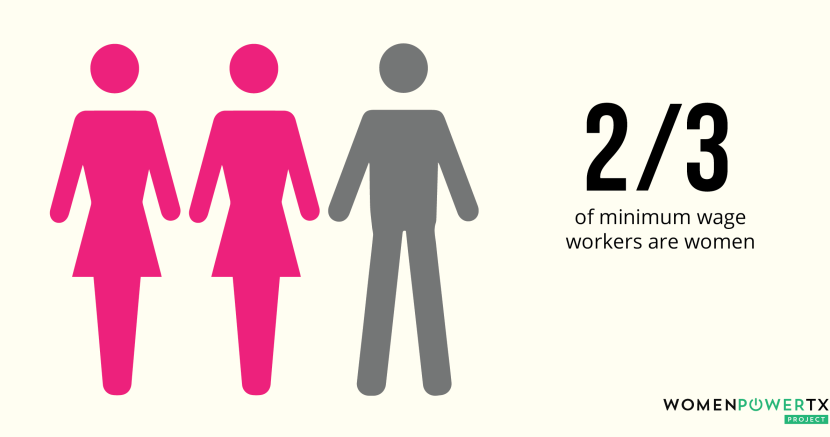 Editorial Note: This article was originally posted on the Texas Research Institute blog.

As the call for policies that ensure women get equal pay for equal work gets louder, this number cannot be ignored: nearly 2/3 of minimum wage workers in Texas are women. Raising the minimum wage — which has languished at $7.25 since 2009 — would go a long way towards the economic empowerment of Texas women, with women of color — who are vastly overrepresented in low-paying industries — standing to gain the most.

A recent study conducted by the Economic Policy Institute concluded that a progressive women’s economic empowerment agenda “must close the gender wage gap and raise wages to improve living standards for all working people.” Click here to join the Women Power Texas Project, a new intiative that strives to do just that.

The current minimum wage in Texas doesn’t even begin to cover an individual’s basic living expenses, let alone the basic needs of workers who are supporting a family. According to the Center for Public Policy Priorities, Texas women have a higher poverty rate than men across the board in every age group. A woman working full-time at the minimum wage in Texas today makes $15,080 a year, below the poverty line for a mother with one child. If Texas were to raise its minimum wage to just $10.10 per hour, 344,000 single working mothers would get a raise and be on the path to a living wage.

Contrary to repeated claims of minimum wage opponents, the overwhelming majority of those who would benefit from raising the minimum wage in Texas are adults, only 3% are teenagers. These hardworking Texans — the majority of whom are women, nearly half of whom live in households with children, and more than half of whom are Latinos — spend their careers working in frontline low-wage industries that make the Texas economy powerful.

Women in Texas — and across the country — are paid less than men for the same work, yet are constantly expected to do more with less. The pay gap numbers in Texas are shocking, especially for women of color who bear the brunt of the gender pay gap:  African American and Latina women in Texas are paid 59 cents and 44 cents, respectively, for every dollar that white men are paid. Raising the minimum wage would help close this gap by raising the wages of those women at the bottom of the income spectrum.

It’s well past time for Texas to raise its minimum wage. Click here to join the Women Power Texas Project and voice your support for policies — like raising the minimum wage — that empower Texas women and make Texas a more powerful state.