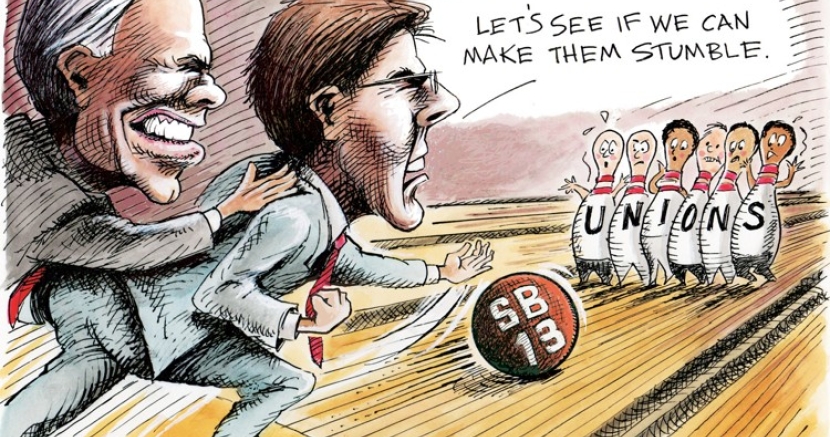 Huffman's bill seeks to punish some union members because they sometimes challenge authority and authority doesn’t like that.

It’s alarming to see how quickly some Republican leaders of an extremist bent can turn their followers on opponents. It’s like Donald Sutherland’s space-alien howl and pointed finger in the film, “The Body Snatchers.” The extremists point to a villain, and their followers, full of instant animosity, attack.

Now Donald Trump is doing it to the media. He calls journalists “enemies of the people.” Trump’s shouts and gestures resemble Sutherland’s in the classic sci-fi/horror movie. Everyone whose body has not yet been snatched is an enemy. They aren’t opponents. They are enemies.

The picture comes to mind as the Texas Legislature considers Senate Bill 13, which was designed to make it harder for voluntary members of some – just some – unions to pay their dues. Currently, public employee union members can have dues automatically deducted from their paychecks the same way they have their gym memberships and charitable giving are deducted.

The bill singles out teachers, corrections officers and child protective service workers. Police, firefighters and first responders can continue to use the convenience of automatic deductions. There is, by the way, no cost to taxpayers for the automatic pay check deductions.

State Sen. Joan Huffman, R-Houston, didn’t earn many new friends when she explained that police and firefighters weren’t being punished by her bill because they do their jobs with “honor and distinction.” And teachers, prison guards and Child Protective Services caseworkers don’t? By the way, police, fire and first responder union members also oppose the bill. They recognize a divide-and-conquer strategy when they see it.

Some of these workers are in the habit of asking legislators to provide resources necessary to educate Texas children. What audacity! How dare they speak against the authority of Republican leaders and bureaucrats?

Not that the Republicans are giving up on the elimination idea. That is in large part what is behind their school privatization schemes. Teachers in privately run schools that are unaccountable to local school boards or the state could be forced into political docility.

Texas is a right-to-work state. That means no one can be forced to join a union. They are voluntary. But many on the right have long considered the brotherhood and sisterhood of unions to be anathema? Why?

Well, alliances and friendships among employees threaten the authority of some bosses, particularly the more paranoid or insecure bosses. It’s as simple as that. Many on the right believe employees are children who should obey their “parents” at the top of organization hierarchies. Employees who band together to ask for better pay or benefits are seen as unruly kids. They need to be punished.

And that’s what Huffman’s bill — made a priority by Gov. Greg Abbott and Lt. Gov. Dan Patrick — is all about. It seeks to punish some union members because they sometimes challenge authority and authority doesn’t like that.

There is no real public policy reason behind the bill. It is, however, a pet project of Empower Texas, a far-right group that has tried very hard over the years to unseat Republican Speaker of the House Joe Straus.

Leaving aside the insulting “some-are-more-honorable-than-others” arguments, the central argument for singling out teachers and a few others for punishment rings hollow. Advocates say it’s not fair for the state to deduct dues for employees when those employees might later show up advocating for this or that action. Seriously?

Those who make such an argument hypocritically overlook the massive amount of corporate tax breaks and other financial favors legislators provide their cronies. Millions of those dollars are then used by the beneficiaries of legislative largess to make campaign contributions or to finance lobbying and other advocacy efforts.

All this shouting and finger-pointing ought to be a wake-up call for all of us. Body snatchers never tire of finding the unsnatched to villainize. Next time the Sutherland finger might point at, say, rowdy neighborhood activists or committed PTA leaders. Or you.

Huffman’s bill is pending before the state Senate.