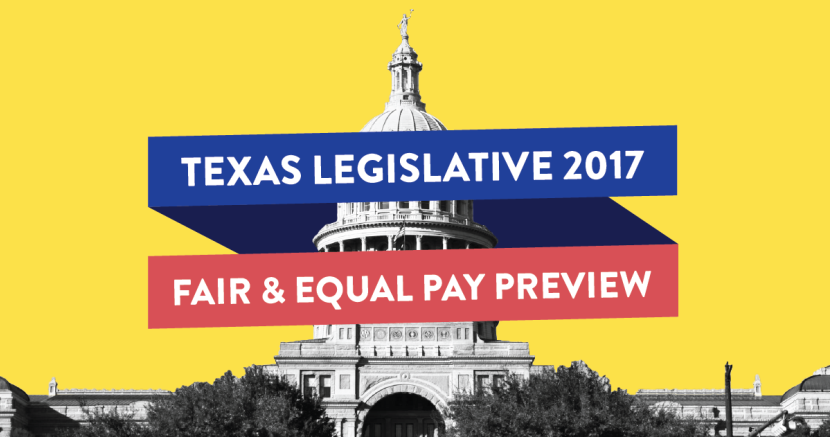 With the state’s legislative session starting this month, progressive lawmakers in Texas have taken the lead in championing fair and equal wages for all working Texans.

In stark contrast to the horribly backwards bills filed by Republicans, the smart policies proposed by Texas progressives reflect their commitment to improving the lives of Texas families across the state.

The reality is that in 2017, research still shows that no matter how you parse the data — like factoring in education, occupation, experience — there’s a significant pay gap between men and women. We hear the 79 cent statistic a lot — that on average, a Texas woman working full time, year round make 79 cents for every dollar a man makes. But when you dig a little deeper, that gap gets even worse for women of color: African-American women are paid 59 cents and Latina women are paid 44 cents on the dollar.

Texas has no statewide, comprehensive equal pay protections. But thankfully, strong progressives in Texas House and Senate understand that making sure that women are paid fairly, strengthens Texas families — three Texas Democrats filed bills that would go a long way toward closing the pay gap.

HB 228 by Rep. Senfronia Thompson and SB 223 by Sen. Jose Menéndez would make it easier for Texas women fight back against wage discrimination in state court. This law passed with bipartisan support in 2013, but was vetoed by then Gov Rick Perry. It was introduced again last session, but Republicans voted against it.

HB 290 by Rep. Eric Johnson and SB 1160 by Sen. Sylvia Garcia would strategically eliminate salary history from job applications to prevent lower salaries from following women around from job to job and promote pay transparency by keeping businesses from punishing employees for discussing pay.

Almost every Texan needs time away from work to recover from a serious illness or care for a sick loved one or new child at some point. And yet, more than 4 million hardworking Texans don't have the opportunity to earn even a single day of paid leave — forcing people to face the impossible decision between their health and the health of their family or their job and livelihood. Texans deserve the security that comes with knowing they won’t lose their paychecks if they get sick or have a kid.

HB 656 by Rep. Ina Minjarez would give employees the opportunity to earn up to 30 days of paid family or medical leave. If their employer does not already provide paid leave, and the employee has been employed there for at least one year, they would be eligible for replacement benefits.

All hardworking Texans deserve, at a minimum, a fair wage — one that can cover basic living expenses like food, housing, healthcare, and transportation. However, according to data compiled by Center for Public Policy Priorities (CPPP) a single worker in central Texas would need two full-time minimum wage jobs just to cover these necessities.

The current minimum wage in Texas is $7.25 per hour — the federal rate set in 2009 — meaning a full-time, minimum wage worker earns $15,080 annually, below the poverty line for a household of two. Texas Democrats are going into session fighting for a living wage for all hardworking Texans.

SB 229 and SJR 22 by Sen. Jose Menéndez would enable hardworking Texans to earn a living wage by raising the Texas minimum wage to $10.10. This long overdue increase would benefit nearly 2.4 million Texans.

HB 285 by Rep. Roberto R. Alonzo and HB 475 by Rep. Ron Reynolds would raise the minimum wage in Texas to $15. This would allow a family of 4, with 2 full time minimum wage workers to meet their basic living expenses in Texas cities like Austin and Houston.

HB 840 by Rep. Lina Ortega would allow counties and municipalities to establish a local minimum wage, so long as it is above the state and federal level. This legislation would enable counties and cities to address the needs of their communities.