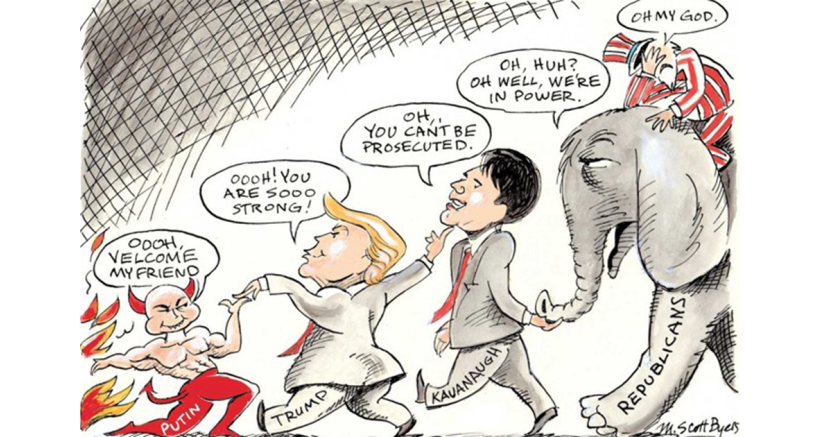 The Path Where Kavanaugh and the Supreme Court Will Take Us

A person of honor would turn down a judicial appointment from President Donald Trump. So, Brett Kavanaugh, what will it be? Will you blind yourself to Trump’s treasonous transgressions and have your descendants suffer the historical footnote that links you forever to a president who betrayed America? Asking for several million friends.

Trump turned his back on the United States when he went to Russia to bow before Vladimir Putin, praised the Russian president and dismissed the fact that Russia had attacked the voting rights of all Americans when it hacked the 2016 election on Trump’s behalf.

Kavanaugh, a federal appeals court judge, is Trump’s second pick for the Supreme Court. Justice Neil Gorsuch was the first, appointed to the court after U.S. Sen. Mitch McConnell’s GOP-led Senate refused for a year to even grant a hearing to President Barack Obama’s choice to replace Antonin Scalia.

Before assessing what America will look like when right-wing extremists like Kavanaugh and Gorsuch have control of the court, we should remember that this turn of events is a consequence of an election outcome influenced by an adversarial foreign power.

There’s no question that Russian agents intervened in the 2016 election. Some in the GOP acknowledge the Russian campaign, but claim – preposterously – that it had no impact on the election. That’s like saying bullets had nothing to do with the death of a shooting victim, arguing instead that those mysterious holes in the body did it.

What will America will look like under an extremist court that includes Gorsuch and Kavanaugh? The following forecast is bleak, because it’s a worst-case portrait that assumes political forces of justice and equality can’t gain sufficient political power to rein in a highly partisan judiciary. Heed the warning, and we avoid this future.

So, under a Trump-packed court, America might look something like Putin’s Russia looks today. Russia scored 20 out of 100 on the “Freedom in the World 2018” assessment. A judiciary cowed and little more than an apparatus of one-party rule. Partisan mandates substituted for the rule of law.

Kavanaugh has already argued that sitting presidents should be protected from investigation and lawsuits. Presumably, that’s the very reason Trump picked him. It’s likely that issues related to ongoing investigations of Trump are headed to the court.

In several recent rulings, the court has struck down critical protections of Americans’ voting rights, especially those that protect minorities, students and the elderly. Just recently, the court more or less endorsed partisan gerrymandering, meaning that once a party gains control of a state legislature, it can draw representatives’ lines to guarantee its continued power. Buh-bye Voting Rights Act.

The Supreme Court has so inverted democracy that it favors a system in which politicians choose their voters, guaranteeing themselves a lock on power — rather than voters choosing their elected leaders.

Civil rights? Trump has already moved to reverse rules on affirmative action. And, today’s Supreme Court has approved Trump’s travel ban, which, despite arguments to the contrary, punishes followers of a particular religion. It’s not unrealistic to worry that the Civil Rights Act of 1964 might be declared unconstitutional.

Millions will lose health care as the privileged treat hospitals like their own private country clubs: The poor and middle class simply don’t belong there. Women will suffer disproportionately as health laws return that imprison them in second-class status.

Environmental protections will go the way of hula-hoops and Pet Rocks. As puppets of industry leaders who still behave as if public health is no concern of theirs – coal executives, for instance – the court could well diminish air quality regulations to the point that we’ll have to submerge ourselves in the overheated climate’s rising oceans to escape the coal dust in the air.

Public education will wither under legal assaults aimed at giving advantage to privatized schemes that limit educational opportunities for the poor and middle-class.

This will all be done by a court majority stuck with an ideology born of early and mid-20th-century nostalgia for 19th-century industrialization and long-discredited laissez-faire economic policy. Who needs a constitution or a rule of law when the invisible hand of the market will do all the social enforcement those in power need?