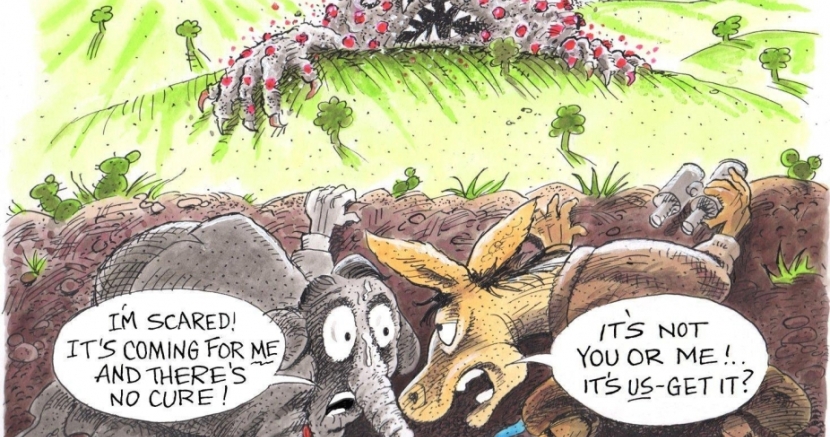 A pandemic reveals our interdependence

Illustration by M. Scott Byers
Isn’t it obvious as the coronavirus spreads throughout our communities that the safest way to remain healthy is to help others remain healthy?

Here’s a thought experiment: You’re waiting on a street corner for the walk sign to change. The person next to you has a runny nose and sneezes into his elbow, responsibly. Still, because a dangerous pandemic is loose upon the land, you’re concerned and irritated.

It turns out the sniffling person has no health insurance because of the policy decisions of Texas state leaders. You back those leaders. So, there’s a chance you might catch the contagion from a person who has gone untested and untreated because of the policies of politicians you support.

Texas has the highest rate of uninsured residents in the country. About 5 million people without health insurance. About 900,000 of them are children.

Gov. Greg Abbott and other Republican leaders have refused to accept billions in federal dollars to expand health care available under Medicaid. Texas GOP officials have also taken the lead in a federal lawsuit to void the Avoidable Care Act and its protections for those with preexisting conditions.

The street corner thought experiment, which is likely happening in reality on street corners throughout Texas today, puts into focus a biological, psychological, economic and socio-political fact we too often deny: We are a species of completely interdependent beings.

This is not to deny the reality of individuality, not at all. It’s our recognition of the sacredness of other individuals that makes possible our life together.

But, isn’t it obvious as the coronavirus spreads throughout our communities that the safest way to remain healthy is to help others remain healthy?

This is the argument from enlightened self-interest. And, it’s not the only argument, as the traditions of many faith traditions, and secular ones, too, make clear. We arrive on Earth with certain moral responsibilities toward one another.

Since early in the 20th century, medical advances have made the costs of many health care treatments outpace the incomes of many Americans. That’s an economic fact.

Discussing this dilemma in terms of a “social safety net” kind of misses the point as it has come to carry an implication that it’s only other people who will ever need such a thing.

The truth is, we are all already in the net, the net of interdependence. How safe it is for all of us is another question.

Abbott and others got it exactly backwards when they argued that we couldn’t afford to accept billions of federal dollars to make Medicaid available to about 1 million Texans currently without health insurance. The truth is, we can’t afford not to.

At a minimum we should have a health care system that takes care of all of us, because if it doesn’t, it may fail all of us. A good place to start here would be to begin accepting the expansion of Medicaid, since Texans have already paid the taxes that fund it.

As Texans lose their jobs to COVID-19 displacement or to the recent collapse of oil prices, what will happen to their access to health care? One could shrug and say, “It’s not my responsibility to worry about them.” As the pandemic makes clear, that would be a very, very bad idea.