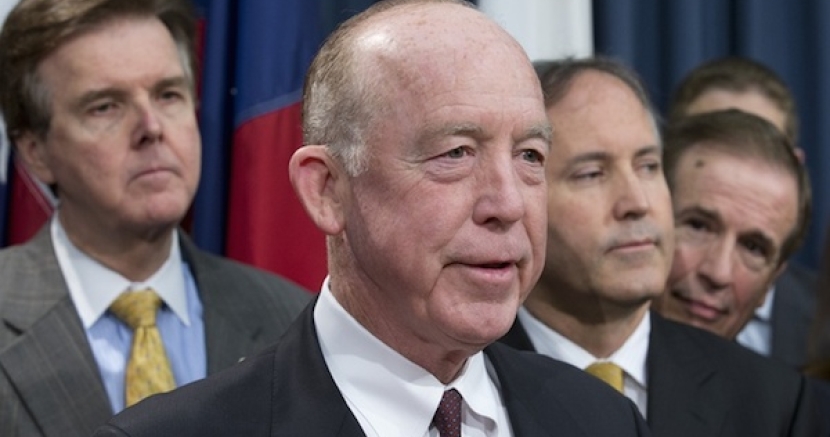 Hotze, a doctor who is widely regarded as a quack, is also a big donor to Tea Party politicians in Texas.

Steve Hotze, the president of Conservative Republicans of Texas, is a leader in the campaign to repeal Proposition 1 the Houston Equal Rights Ordinance (HERO) this November. Hotze, a doctor who is widely regarded as a quack, is also a big donor to Tea Party politicians in Texas.

Here are five things you should know about the hatemongering man who is trying to turn Houston into a model for anti-LGBT discrimination.

1. He said this during an anti-HERO rally:

Hotze says we should kill gays the same way American soldiers killed Nazis. I am not making this up.

2. He wrote this in an email titled “Homosexual Manifesto Threatens America” promoting the same rally to supporters:

"No more special privileges for special interests! What about the rest of us?

The Homosexual Political Movement (LGBT) wants it to be mandated that school children, starting in kindergarten, be taught that homosexuality is normal, wholesome and healthy. Children will be encouraged to experiment with the homosexual lifestyle. This is so that the children can be more easily recruited into the homosexual lifestyle. Homosexuals cannot reproduce, so they recruit. Those that oppose the Homosexual Political Movement (LGBT) will be accused of ‘hate speech’ and charged with criminal activity. Biblical Christianity will be criminalized. Is this what we want for Houston, Texas or our nation?" [emphasis in the original]

3. He compared gay people to murderers and rapists.

“Greetings in the name of Christ our King!” Hotze wrote Paxton about two hours after the court ruled on June 26.

“Do what the Louisiana AG has done,” Hotze said in an email, urging Paxton to emulate that state’s Republican attorney general who said Louisiana didn’t have to comply because there was no specific line in the court ruling saying so.

“The illegitimate SCOTUS ruling does not name Texas, so fight those lousy bastards,” said Hotze, president of Conservative Republicans of Texas, a group influential in Harris County GOP primaries. “They hate God and want to let the Sodomites queer our country.”

5. He believes that taking birth control pills makes women less attractive to men and has aligned himself with a group that believes that "the ultimate cause of all disease, deformity, disability, and death is the sin of Adam and Eve."