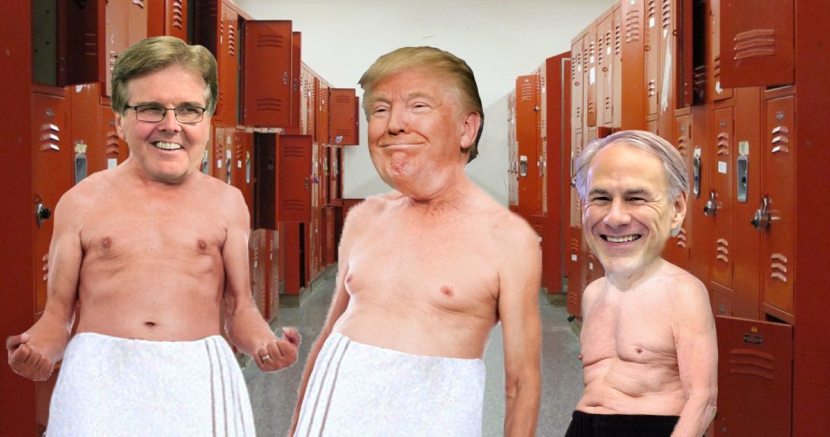 In the Locker Room with Trump – Where Abbott, Patrick and Other State Leaders are Hiding

Boys will be boys is not an acceptable answer for sexism

Ed. note: this column was originally posted at Quorum Report.

All four Texans and a practice squad of lesser GOP officials remain wedded to Trump, refusing to ask for an annulment despite Trump’s demonstrated hate for women, Latinos, veterans, African-Americans, and the United States Constitution.

Even Trump’s bragging about the sexual assault of women is not enough to break up the all-male huddle. “It’s locker-room talk,” Trump says.

Today, you could visit any male locker room in any Texas high school and find many candidates for president more qualified than Trump. I know, the minimum age to be president is 35. Does anyone any longer believe that Trump, despite his 70 calendar years, meets that threshold?

None of this appears to matter to Abbott, Patrick, Cruz and Bush-the-Even-Younger. They are too busy sneaking up behind one another in a political locker-room towel snapping fight. Who will run for student body president? Who gets most handsome? Who will be prom king? Each is suspicious of the other three. All are fearful of Trump’s base.

“Snap!” “Ow!” Someone’s towel has caught a competitor by surprise. Boys will be boys.

I am doing Texas high schools a great disservice here, populating them as I am with these political delinquents. But Roget has thrown up his hands, his Thesaurus spent. We’re almost out of telling adjectives and parallels (but not quite!).

There is, of course, a curve of badness around Trump, a calculus of abominable con men (almost all are men) and political infinitesimals.

There are those in the GOP who left Trump not because they disagreed with his aggressive sociopathic attacks on the standards of civil America. No, it was only when Trump’s poll numbers began to slide that these slippery politicians, un-offended by Trump’s crudity, left the gang to try to save their own hides.

There are others, like the empty-suited U.S. Speaker of the House Paul Ryan, who seem to say they believe Trump unfit for office but continue to support his presidential bid anyway. Faced with Trump, Ryan Shrugged (h/t to his hero, Ayn Rand).

Then there’s U.S. Rep. Blake Farenthold, who represents the unlucky people of the Corpus Christi-Matagorda area. Farenthold said he would consider continuing to support Trump even if Trump said publicly, “I really like raping women.” Farenthold apologized after staffers reminded him that, you know, rape is a political negative.

This presents the voters of Farenthold’s 27th Congressional District with a question a bit more complicated than the one MSNBC’s Chris Hayes put to the congressman: Would you continue to support Farenthold if he continued to support Trump if Trump continued to brag about sexually assaulting women? We’re guessing voters will have an easier time answering it than his Blakeness had answering Hayes’ query.

From outside Trump’s locker room we can hear the towels snap. Abbott, Patrick, Cruz and Bush-the-Even-Younger are at it again. Even the coaches refuse to enter. The school’s graffiti artists are busy spray-painting “Abandon All Hope Ye Who Enter Here” above the gym doors.

A female student, the school’s likely valedictorian, is walking with a friend down the hall. They pass the locker-room door. “I thought those guys in there said they were all about protecting us from predators in the locker rooms and bathrooms?” she asks.

The girl and her friend walk on. The bell rings for class. In the locker room, the towels snap.