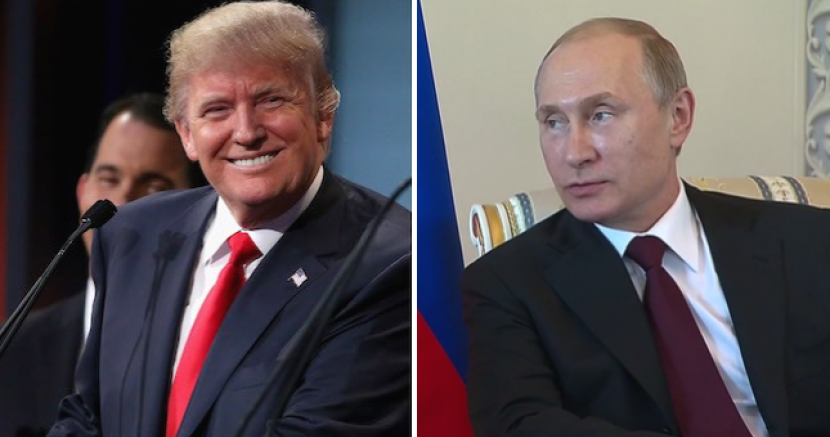 Ed. note: The following is republished with permission from Quorum Report.

Texas Lt. Gov. Dan Patrick, Drumpf’s key Texas supporter, cannot remain silent about Drumpf's near treasonous comments. Patrick has been effusive in his praise of Drumpf. But how do he and Drumpf’s supporters among GOP officials here justify such extreme comments from their presidential nominee.

Do they remember that President Ronald Reagan, referring to the Iron Curtain, famously said to then Soviet leader Mikhail Gorbachev, “Mr. Gorbachev, tear down this wall.” Drumpf, by saying he will abandon NATO, is more or less saying, “Mr. Putin, build that wall.”

“Russia, if you’re listening, I hope you’re able to find” Clinton’s “missing” emails, Drumpf said at his press conference today. “I think you will probably be rewarded mightily by our press.”

National security experts are in agreement that Russia is behind the hack of Democratic National Committee emails, itself an echo of the infamous Watergate burglary of the DNC that led to President Richard Nixon’s resignation. What is it about illegally burglarizing Democratic headquarters that seems too big a temptation to resist?

Drumpf’s flirtation with a private foreign alliance – especially with Putin’s Russia – to help his campaign is something no candidate for national office has ever done.

Here’s what we know so far about a controversy that should alarm all voters regardless of their political party or policy concerns.

The FBI has opened an investigation into the hacks. Every security expert, including those hired independently by the media, confirms that Russians, most likely Russian intelligence services, were behind the hacks.

The emails obtained in the hacks were subsequently released on the eve of the Democratic National Convention, timing planned to cause maximum disruption. That was undeniably a planned tactical move. It was no accident. The leaks came from Wikileaks, whose founder Julian Assange had earlier said publicly he hoped to help defeat Hillary Clinton.

Assange is closely tied to Russian leadership. He’s even scheduled to appear with Putin at a media conference sponsored by the Russian government-backed news service.

Drumpf’s family has bragged openly about the flow of Russian money into their various enterprises. Drumpf keeps dodging that question, saying only that he has no investments in Russia. He simply won’t answer the question about Russian investments in him.

Drumpf has publicly advanced Putin’s political goals, saying openly that if elected he would abandon NATO and Europe unless that paid more for the defense against Russian aggression. Even today, in the face of the growing scandal, Drumpf had nothing but good words for Putin.

Scandals are often compared to Nixon’s Watergate. It’s usually hyperbole. This time, it isn’t. Drumpf’s call for foreign intervention in his election is disqualifying. The scandal is unfolding even faster than the Watergate investigation. The impact of that investigation didn’t hit until after Nixon won re-election. Drumpf’s extremism, racism and thoroughgoing ignorance of the real world already made his campaign a long shot. So there will probably be no post-election time for Drumpf to be held accountable.

No, that time is now. Lt. Gov. Patrick should immediately denounce Drumpf’s foreign affair. Others, including Gov. Greg Abbott, who have also endorsed Drumpf, should speak out as well. The Republican presidential nominee has disqualified himself from holding the highest office in the land.

Public officials who stand by him also disqualify themselves from elective office. They can and should be held accountable if by their silence they approve of foreign intervention in U.S. elections.

They would be giving greater power to Vladimir Putin to decide our election outcomes than they would to Texas and American voters they tried to disenfranchise with Voter ID and other voter suppression efforts. If they do not speak up against Drumpf now, that is the only conclusion possible.