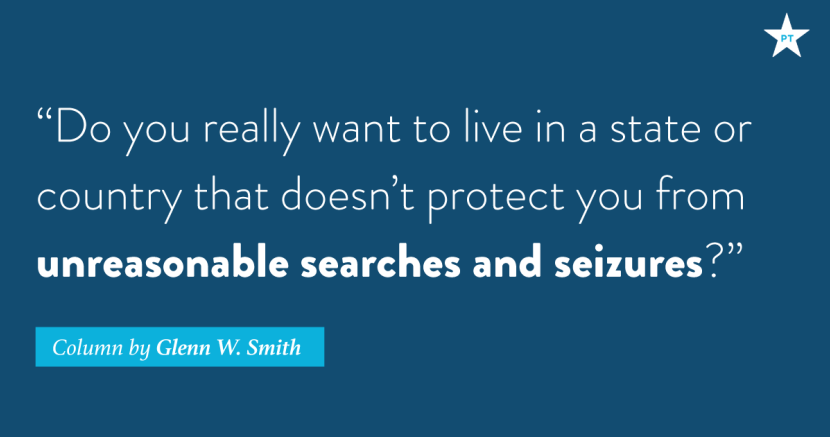 Glenn W. Smith
Ken Paxton wants legal protections for himself that he’d deny everyone else in his argument for the constitutionality of SB4

The contrast is enlightening. Let’s compare the legal avenues open to Attorney General Ken Paxton in his criminal securities fraud cases to the police-state, judicial road-closings he argues for in his SB4, anti-sanctuary city federal petition.

Paxton faces three felony charges of violating Texas’ securities law. His high-paid lawyers (it’s great to be Attorney General!) have filed (and failed with) an unending series of motions to get rid of the judge, block a change of venue, challenge payments to special prosecutors, etc.

Lawyers in a functioning criminal justice system should pull out all the stops for their defendants, especially if their client has all the money he needs to pay them. The fact that most people don’t have Paxton’s resources to fight the good fight is one of those things we’d rather not think about as we pretend equality under the law.

Anyway, let’s look at just one of Paxton’s arguments in his filing that asks a federal court to declare constitutional the Legislature’s just-passed anti-sanctuary or “show me your papers” bill.

Paxton argues that SB4 does not violate the Fourth Amendment of the U.S. Constitution. This is the amendment that guards against police-state tactics by protecting us against unreasonable searches and seizures. Probable cause must be asserted before someone is arrested or jailed.

Paxton argues that Immigration and Customs Enforcement officers have the right to find probable cause and issue warrants all on their own, without seeking a warrant from a magistrate. It’s true there is something called a civil administrative warrant that gives ICE police limited ability to assert probable cause all on their own. Weirdly, this applies only in public places. They can only seize someone off the street. Can’t come into your home unless you invite them (hint: don’t invite them).

Paxton then asserts that the extra-judicial ability to find probable cause and issue “warrants” extends to local authorities under SB4, that is, in immigration matters. Furthermore, under SB4, should local authorities fail to abide by the new state “show me your papers” law – and ignore the Fourth Amendment – they themselves commit a criminal offense.

We have to assume that probable cause and warrants aren’t necessary in these cases, either. Fourth Amendment-honoring local officials can also be removed from office for their love of the Constitution.

Here’s where the contrast with Paxton’s rights and legal remedies and his view of others’ rights and legal remedies becomes crystal clear. In Paxton’s view, you or I can be searched, seized, detained and shipped off to an unnamed detention facility – probably privately owned by well-healed political contributors – for an undetermined amount of time.

Lawyers can’t find us and we can’t find lawyers. Our families will wonder where we’ve gone. There is, under SB4 and Paxton’s defense of SB4, no remedy. We have to wonder what Paxton would have to say if we’d applied these practices in his own criminal cases? He might be awaiting trial by busting rocks under the hot sun in an undisclosed location where even his lawyers couldn’t find him.

It’s important to note that ICE police often ask local officials to jail people ICE wants to check up on. ICE doesn’t show probable cause. They just want someone jailed while they supposedly check out their immigration status.

Now, some non-brown-skinned people may be thinking, “Well, this won’t apply to me. I’m not from Mexico. I’m not Muslim. My grandfather is from Norway. I’m as pale-skinned as they come. Why worry?”

Do you really want to live in a state or country that doesn’t protect you from unreasonable searches and seizures? What about a country or state that’s worse than that, one that criminally punishes local officials who refuse to ignore the Fourth Amendment and unreasonably search or imprison you?

This is what SB4 does and it is what Paxton argues for. So very different from the legal protections Paxton seeks for himself.