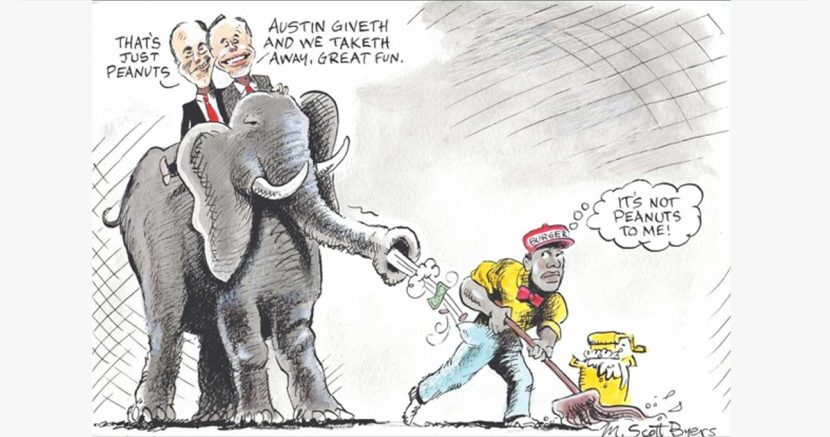 It is always startling when we discover we must fight for government policies that should already be law. Paid sick leave for workers is one such policy. It has common sense on its side. Everyone benefits. Economies grow. Our health and the health of our neighbors get a boost — or at least avoid unnecessary jeopardy.

Common sense hasn’t been on the menu in Texas for many years. Some smart folks propose paid sick leave for workers — and right away, here come the tight-fisted business types who may count beans but surely never served them up on a minimum wage at an all-night diner.

It’s also unlikely that the owner of Scrooge’s All-Night Seafood Sandwiches ever worked a double shift to earn enough for his kid’s prescription that needed to be picked up before school the next day.

If he had, the business owner might have more understanding of the challenges faced by many of his workers. Without paid sick leave, a few days home with the flu can mean the kid goes without medicine, the car is repossessed, and unpaid interest on the student loan grows larger.

So what, you say. It’s dog eat dog at Darwin’s Diner. It’s his or her own fault that a worker can’t cut it because he or she caught the flu from a co-worker — who came to work sick because he or she wouldn’t get paid if he or she didn’t.

Hourly workers struggle from paycheck to paycheck without breaks — unless they’re sick too long; then, they’re fired.

The Austin City Council, recognizing that their housing affordability crisis was only going to get worse if the temporarily sick fell further behind in their already unaffordable rent, has sensibly passed a paid sick leave ordinance.

Austin’s approach seems like a moderate solution to part of the meanness of our surly world. But, judged by the reaction of punch-clock business owners, right-wing think tanks, Gov. Greg Abbott, Attorney General Ken Paxton and others, you’d think city leaders just stuck a fork in their privileged futures.

Can we pause a moment and pay our respects to irony as we note that anti-minimum wage Republicans are going to court to defend – defend! – the integrity of a minimum wage law? Thank you.

Unpersuaded by the plight of others? Answer this, then: Do you really want to be served your food by a waiter flushed with fever, beads of sweat on his forehead, soiled tissues behind the breast-pocket pen he or she will hand you soon to sign your check? Thought so.

That waiter goes to work because he or she can’t afford not to. He or she is there with a contagion because of the circumstances – and because short-sighted politicians like Abbott and Paxton tell that waiter if he or she wants to make rent that month, he or she must show up.

GOP leaders and others oppose it. Why? Because they believe unpunched punch clocks are the devil’s playthings? Because market gods wouldn’t let us get sick if we were supposed to go to work? Because they’re mean?