It’s Time to Raise the Minimum Wage in Texas 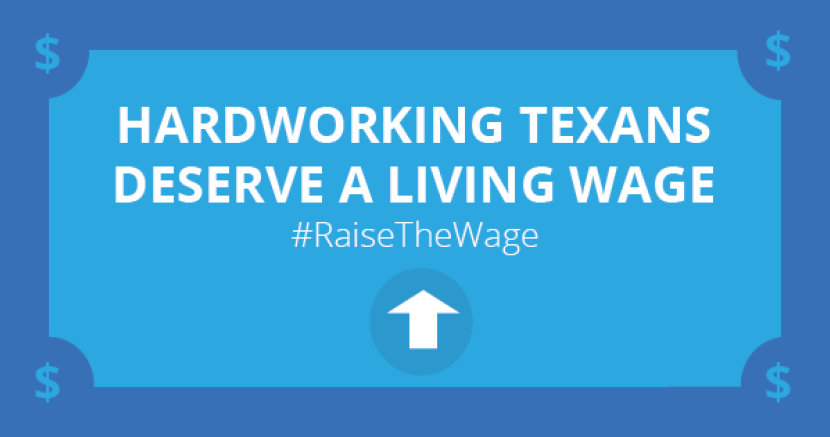 Today the House Business and Industry Committee will hear 7 bills that all aim to raise the minimum wage in Texas. Two bills—  HB 41 and HB 42—  as well as a constitutional amendment have been proposed by Texas House Rep. Trey Martinez Fischer which would increase the minimum wage in Texas from $7.25 per hour to a liveable wage of $10.10 per hour. House Reps. Eddie Lucio III, Senfronia Thompson, and Luis Gutierrez have proposed similar bills that would raise the state’s minimum wage.

A bill proposed by Rep. Ruth McClendon would give local governments authorization to raise minimum wage for their own residents. Texas is one of 19 states that prohibits cities from setting their own minimum wage standards, effectively preventing wage increases across the state.

What Does This Mean For Texans?

Texas has the highest number of minimum wage workers in the country. Around 2,865,000 Texans would get a much deserved pay raise if the state adopted a higher minimum wage, and more than 1.8 million Texas children would see at least one parent receive a pay raise that would certainly help their family.

Working full-time job at a minimum wage salary provides $15,080 at the end of the year— an amount that is insufficient to support a family, or even a single individual. And according to the CPPP Family Budget Calculator, the federal minimum wage of $7.25 per hour doesn’t provide enough to cover an individual’s most basic living expenses in Texas. A worker in central Texas would need two full-time minimum wage jobs just to cover basic living expenses like  food, housing, healthcare and transportation. This becomes even more challenging for workers who have families to support. A family of four in a city like Austin or Houston needs a combined full-time hourly income of $30.07, or $62,546 a year just to meet basic living expenses.

Polling has indicated that 55 percent of Texas voters support increasing the minimum wage to $10 an hour, but recent history has shown us that Republicans in the Texas Legislature— including our Governor— are against raising the minimum wage, despite what’s best for Texans.

Texans need and deserve a livable wage. And we, like you, stand behind the legislators fighting for that right.