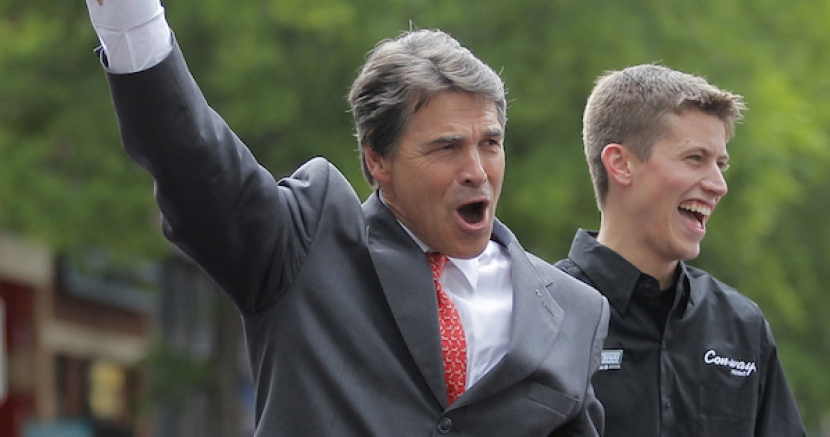 Rick Perry declared for president on this day in 2011 before quickly fizzling out. Four years later, things aren't going any better.

It was on August 13, 2011 that Rick Perry entered the Republican presidential field, on top of the polls and stealing thunder from Michele Bachmann who had just won that year's Iowa Straw Poll. Bachmann soon flamed out and and Perry's campaign was greeted with thunderous applause before it effectively ended 90-days later after a series of mishaps capped-off by his famous "oops" moment.

Give the man credit for a disciplined approach at rebuilding his image since then. He's spent time immersing himself in foreign affairs, and he has spent the time necessary to build campaign operations in Iowa and New Hampshire. He's made personal changes, most notably the glasses but also in ditching the cowboy boots that were not helping his back problems.

But the former governor has also had a few unforced errors; he took some well-earned flack for calling the Charleston shooting an accident, he still has that pesky indictment hanging over his head, and he challenged Donald Trump to a pull up contest, which was kind of funny, but came at a time when he should be demonstrating his mental gymnastics.

These things and more have no doubt contributed to Perry's low poll numbers and being left out of the main Republican debate last week (he still played a part in the undercard event for the low-polling candidates, dubbed the "kids table" debate). And these shortcomings, along with a divided Republican Party that has led to a crowded candidate field, have also led to fundraising troubles and his inability to pay campaign staff.

So even with all of that preparation, on August 13, 2015, things don't look that different.