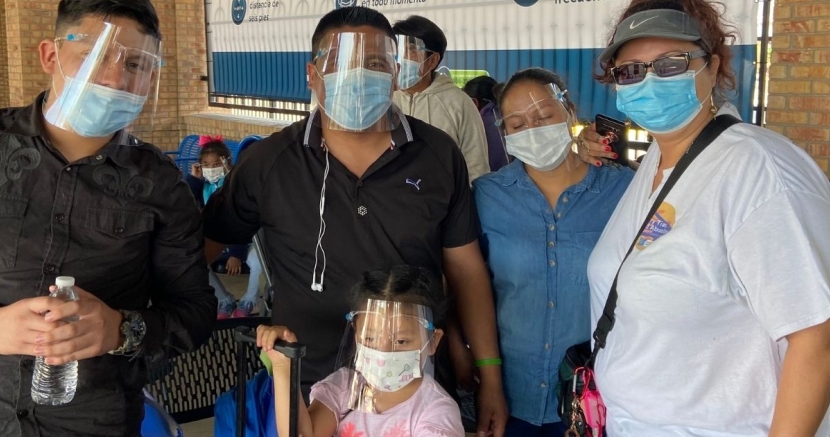 On Feb. 25th, a group of 27 migrants were finally allowed to cross the Matamoros, MX/Brownsville,TX border in order to continue with their asylum proceedings here in the US. This group’s crossing marks the first time in over a year that migrants seeking asylum can do so within the US, since the Trump-era immigration policy known as the Remain in Mexico program was put in place.

The policy required migrants to stay in Mexico for the entirety of the asylum seeking process until their designated court date, regardless of whether or not they were originally from Mexico. This dangerous policy left migrants in an extremely vulnerable situation, forced to live in tent encampments with little resources being shared amongst hundreds of migrants simply waiting alongside the border for the chance to be granted asylum and allowed into the states. Along with the dangerous living conditions, it also made it nearly impossible for those seeking asylum to have it granted due to the inability for some to find legal counsel in Mexico.

President Biden campaigned on the platform that he would undo the Remain in Mexico program, and the Department of Homeland Security under his administration has announced that three ports of entry will open for migrants to pass through. The previous asylum seeking process before Trump merely needed migrants to request asylum as soon as they entered the states, and it was required to allow them to begin the process. Migrants crossing through Matamoros/Brownsville, Juarez/El Paso, and Tijuana/San Diego have all been the first in a long time to pass through those ports of entry in order to wait out their court dates here in the US.

The decision to allow migrants to cross into the states came a week after an arctic freeze hit Texas, leaving those living in tent encampments in extreme danger. This decision was also a result of many negotiations between Mexico, the US, and even the United Nations.

Since the success of the original 27 migrants, over 200 migrants have crossed into the US. Local organizations in El Paso are already preparing by finding volunteers to help with the incoming migrants expected to cross the border daily. Longtime preparation for the programs’s rescindment has allowed immigration advocates to prepare meals, shelter and human services for the migrants, but the numbers show almost 25,000 asylum seekers had active cases under the policy.

Some migrants awaiting their immigration court proceedings have been doing so since 2019, as was the case for one of the original 27 migrants who crossed the border in Brownsville. The decision to open up the ports of entry comes as an extreme relief for migrants and immigration activists.

Joyce Hamilton from the Angry Tias and Abuelas of the Rio Grande Valley said,“The sheer joy and relief on the faces (and in the tears) of families stepping off the bus from a bridge, a river and a tent camp just a few blocks away is so moving.”

Years of waiting with uncertainty and anxiety seem to be coming to an optimistic end with migrants finally having the opportunity to safely enter the US and await their court proceedings here. The steps needed to undo all of the unnecessary suffering the Trump administration inflicted on migrants is long, but this hopeful event is the first step in doing so.