How Texas uses threats and lawsuits to subvert voters’ choices 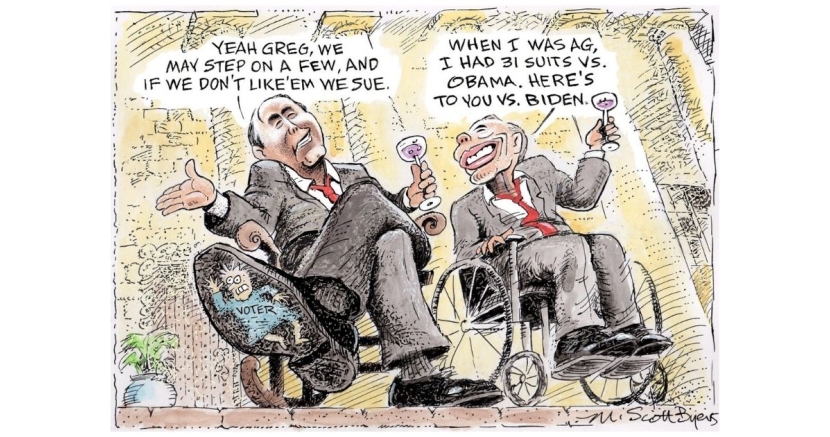 Days before President Joe Biden was inaugurated, Gov. Greg Abbott threatened the Biden administration with lawsuits. Since Biden wasn’t president, there were no substantive matters to challenge in court. Abbott was telling Biden, I don’t like you so I’m going to sue you as soon as I get the chance.

It didn’t take long for Abbott and Attorney General Ken Paxton to find an excuse. Paxton filed suit challenging Biden’s executive order on some immigration matters, arguing that the Trump administration had given states veto power on any changes to Trump’s earlier orders.

We might call Abbott’s posturing “Government by Threat.” Biden, however, isn’t the only target. Abbott’s administration also threatened to withhold vaccines from Dallas County because it didn’t like the way the county was going about distributing them.

Abbott was willing to abandon the people of Dallas County, leaving them vulnerable to illness and death, because local officials weren’t giving him his way. In a sense, it was a threat by hostage taking. County officials, putting their concern for life ahead of politics, capitulated.

Republicans for years have complained loudly about litigiousness, greatly restricting people’s access to the courts under the ambiguous term “tort reform.” It’s not hard to imagine how Republicans would react to a lawyer threatening to find any old reason to sue someone he doesn’t like.

Abbott’s litigiousness is nothing new. He frequently described his previous job as the state’s attorney general this way: “I go into the office in the morning. I sue Barack Obama, and then I go home.”

Nice work if you can get it.

Abbott and Paxton’s “Lawsuitpalooza” is something to behold. Recall the extraordinary lengths they went to in 2020 to use the courts to restrict voting rights in the middle of a pandemic. Paxton, of course, led the charge to repeal the entire Affordable Care Act, including protections for pre-existing conditions. The nation awaits the U.S. Supreme Court ruling on the Obamacare lawsuit.

There’s a political stance of sorts behind all this. Call it “My Power Is Supreme Belief.” As Abbott and his team see it, a good deal of the time their power is superior to both federal and local governments.

What’s often lost in discussions of these claims, threats and legal actions is the fact the state is disenfranchising millions of voters. Abbott might claim to be acting on behalf of his voters, but in actuality he’s using the courts to overturn the will of voters who chose differently from him and his party in national and local elections.

He’s trying to turn the state’s largest urban counties and cities into little more than plantations controlled by Big Daddy Abbott. When it comes to the federal government, Abbott likes to invoke “states’ rights,” echoing the claims of southern segregationist governors.

Voters have little understanding of Abbott and others’ claims of state government superiority. If voters did, the so-called mid-term elections would not suffer the marked drop in turnout they currently experience.

It’s a sure bet that local voters don’t fully understand that Abbott regards the mayors and other local officials they vote for as his own plantation overseers he can overrule on a whim.