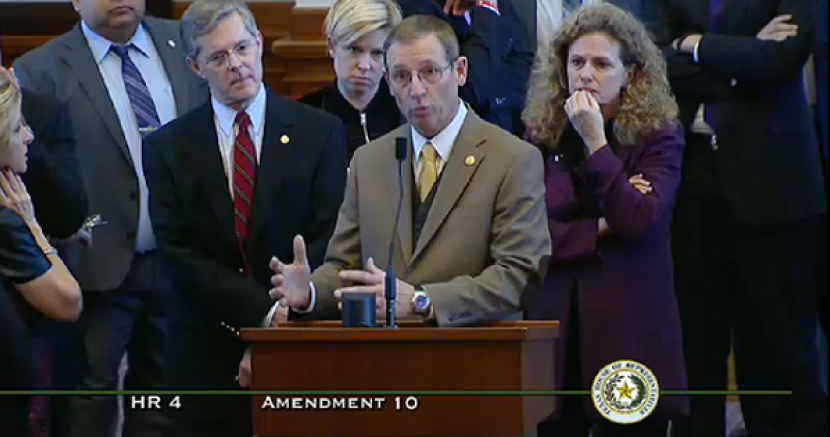 The proposed amendment would guarantee that a member of the public that registered to speak on a bill in committee would be granted the opportunity to speak.

Last Thursday, the Texas House of Representatives passed the official rules of the House. The rules, as we explained in our latest Session 101 post, govern the procedures of how bills become law, the number of committees, and how the public can participate in the process.

During debate and discussion of the House rules, Rep. Boris Miles (D-Houston) offered an amendment that would guarantee that a member of the public that registered to speak on a bill in committee would be granted the opportunity to speak. Here’s the official text from his amendment:

(1) is present at a hearing at which public testimony is taken on the matter; and

(2) has filed the sworn statement with the chair before the time that public testimony on the matter has concluded indicating that the witness would like to address the committee on the matter.

Unfortunately, Rep. Miles’ amendment didn’t pass. He faced strong opposition from a number of Republicans in the Texas Legislature, including Rep. Byron Cook (R-Corsicana). If Rep. Cook’s name sounds familiar, that’s because it was Rep. Cook who, during the special sessions in 2013, denied hundreds of Texans the opportunity to speak in opposition to the infamous abortion restriction laws. (For a recap of Rep. Cook’s actions, read “The Citizen’s Filibuster” chapter of our Filibuster Oral History Project).

Despite the failed amendment, committee chairs in the Texas House will have their own discretion to create rules for how their committees function. Hopefully, other committee chairs won’t follow the lead of Rep. Cook and are willing to let Texans’ voices be heard.

Here’s an abbreviated transcript of the exchange between Reps. Cook and Miles, which begins at the 2:06 mark of the House floor video that starts at 9am from January 15, 2015:

Cook: You want to make sure everybody who signs up gets to testify.

Cook: Even though they’re able to show on there if they’re for or against?

Cook: Do you realize the effect of what this could actually do? You can actually kill bills through the number of witnesses that actually show up. Do you realize that on House Bill 2 at one time we had 3,500 people to testify?

Miles: I realize that, yes.

Cook: With 3,500 people, we give them three minutes a piece, we’d spend ten 24-hour days on those witnesses.

Miles: Yes, I understand that part, but that is not that the intention of this amendment…it is not my intent to kill any bill. But it is my intent to make sure all the constituents in the state of Texas that take time and want to be heard are heard in this House.

Cook: Are you willing to pull this amendment at this point in time so we can talk about this?