Hostilities at Hofstra? The First Presidential Debate of 2016 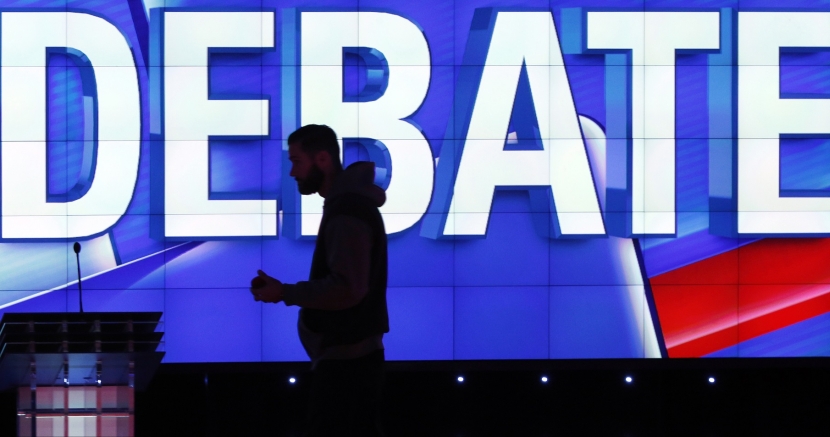 Glenn W. Smith
Another term for empty celebrity is empty suit, and that is exactly how Clinton should regard Trump.

Ed. note: the following colum is reposted with permission from Quorum Report.

Is it just a coincidence that Donald Trump held a bizarre event with fight promoter Don King the week before his upcoming bout with Hillary Clinton in the first presidential debate of 2016? King’s first gig in boxing was the Ali-Foreman “Rumble in the Jungle” fight of 1974. Is Trump promising“Hostilities at Hofstra?”

The phrase doesn’t have the punch of “Rumble in the Jungle.” The debate, however, might match the fight in South Africa in pre-hostilities hype and over-the-top news coverage. Which, we should agree, is not a good thing.

Presidential debates are not about awarding a gaudy golden belt to someone. They are about – or they should be about – the selection of the President of the United States. Elections past have seen good debates and bad debates. Few challenged the political media the way the 2016 debates do.

A primary reason is the Reality TV poison – I mean aesthetic – which Trump has injected into the nation’s political bloodstream. Trump is to American democracy what “Real Housewives of New Jersey’s” Theresa Giudice is to the television arts and sciences. Like Giudice, Trump is popular because of, not in spite of, his tantrums and table flippings. I make no reference to Giudice’s income tax problems.

This is a challenge for Clinton, largely because the national political press hasn’t quite figured out how to deal with Trump’s mastery of empty celebrity. Consequently, the pre-debate spin is to Trump’s advantage. Here’s why.

In many ways, the debate is already Trump’s movie. Going into the debate, he’s the top-billed star of the show poised to receive a larger share of the political equivalent of the entertainment world’s back-end points. In the movie industry it means a share of revenue based on the success of the film. In politics it means a bigger share of post-debate hype.

In the Republican presidential primary debates, Trump’s hapless opponents played into the scripts Trump had, with his TV savvy, already rigged.

Over and over again they reacted to Trump, tacitly acknowledging his lead role even as they tried to undermine it. In the wonderland world of Reality TV, protagonists are stars no matter how ugly or deplorable. Their adversaries become bit players. No points for them.

If Trump, Giudice-like, actually knocks over his podium in anger in reaction to a Clinton criticism, he might lose some of his points. But as they say in the news biz, there’s your lede. Will Trump be judged as dangerously rash and reckless? Sure. But he’s already successfully trafficking in rashness and recklessness.

Clinton’s strengths – her experience, her intelligence, her courage and determination, her poise – are, in this funhouse, almost uninteresting. It’s too easy for viewers to forget they are choosing a president and not voting to favor or disfavor someone on a very unreal reality show.

How is the political press supposed to review such a show? As Trump’s GOP opponents discovered, Trump’s antics led to a rise in his popularity (Sad!). That’s what makes his capers deserving of their attention. They work. Trump has legitimized a new set of political tools. Trump tumps over tables and the applause is deafening.

But another term for empty celebrity is empty suit, and that is exactly how Clinton should regard Trump.

She should forcefully star in her own movie. She should acknowledge Trump’s presence only when she’s playing offense, never on defense. Simply put, she shouldn’t react to Trump at all. She could, for the rest of us, model with a smile (not a frown!) the silent disdain Trump so richly deserves.

If she wants to get in Trump’s head the way Muhammad Ali rope-a-doped George Foreman in the Rumble in the Jungle, that’s what she will do. Trump will stomp and swing until his arms and legs grow tired and his face flashes from orange to red and the tips of his ears melt.

The thing is, Trump is far more of a dope than Foreman was or is. Guys like Trump are easy to rope.