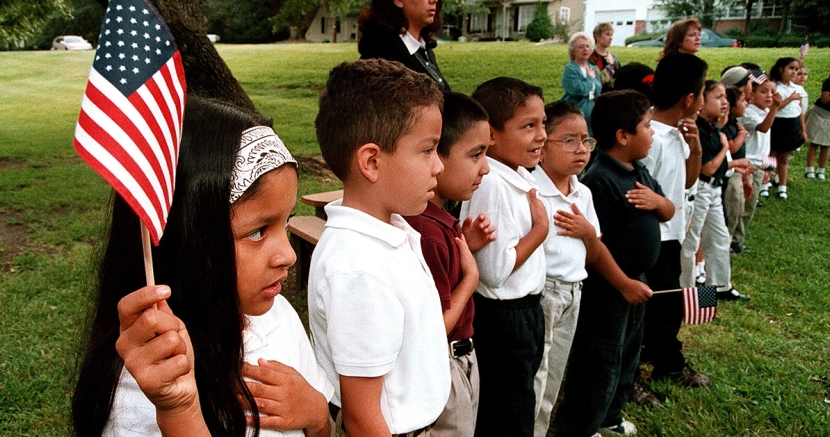 Photographer: Mario Villafuerte/Getty Images
In an era where conservatives are othering Latinos, we should emphasize that Latinos are Americans, too.

When Donald Trump went to New Mexico, he asked the crowd “who do you like more, the country or the Hispanics?” It’s a ridiculous question because it implies that Hispanics are not Americans.

In my own experience, it’s much less-known than Black History Month, Pride Month, or Women’s History Month. This could be because the “month” starts in the middle of one month and ends in another. It could also be because American culture more commonly celebrates Cinco de Mayo, which is so low on the radar for most Latinos that it’s more popularly celebrated in the United States than in Mexico.

Hispanic Heritage Month started off as Hispanic Heritage Week and was meant to be a celebration of the culture and contributions of the community in North America. The week kicked-off on September 15 and lasted through the 22 (coinciding with eight Latin American independence days). Since that time, it has been extended to October 15, making it a full month.

While it may seem like a small controversy to have Hispanic Heritage Month extend halfway through two months, that’s nothing compared to the actual name, specifically the term Hispanic, which has been fading among younger generations. The term “Hispanic” could be viewed as a Census-generated checkbox by the government, or a ploy invented by retailers to capture our ever-growing buying power.

Either way, the sentiment of Hispanic Heritage Month should be to celebrate the culture of millions of Latinx people living in the United States and who embody the American experience. This is especially pertinent now when so many people of Latino descent are subject to racism and harassment on a daily basis.

There is a difference in the definition of Hispanic and Latino, as well as Chicano, Latin-American, and Latinx, but there is also a difference in the commonality of each term - most notably in that Hispanic has become less common than the others - and many consider it downright offensive. That’s in part due to generational usage but also due to identity (learn more about the difference between Hispanic, Latino, and Chicano here).

The changing terms pose a legitimate question; should we still call this Hispanic Heritage Month? The growing controversy has been mentioned in national columns and promoted in online petitions. And a survey of 18 journalists, activists, and writers, said that they did not feel any special connection to Hispanic Heritage Month and that they objected to the use of the term Hispanic, preferring the term Latino instead.

So what should we call it?

Words matter. And whether you prefer the term Latino, Latinx, Latin-American, Chicano, Hispanic, or anything else, the experience is different for everyone. I don’t know what the answer is now, but I do know that if we are going to make the month truly inclusive for everyone, it should have a name that is inviting for everyone it represents.

I suggest the phrase “Latinx American Month” because I like the joining of the two cultures in the name. This will certainly not please everyone but may be an improvement of what we have now.

This isn’t a debate that will be settled in one article, but it is one that will get us thinking. And while we’re thinking about what we call it, let’s take the time to acknowledge the great contributions that Latinos have made to the United States.