Helen Keller’s smile: On the State Board of Education's textbook antics 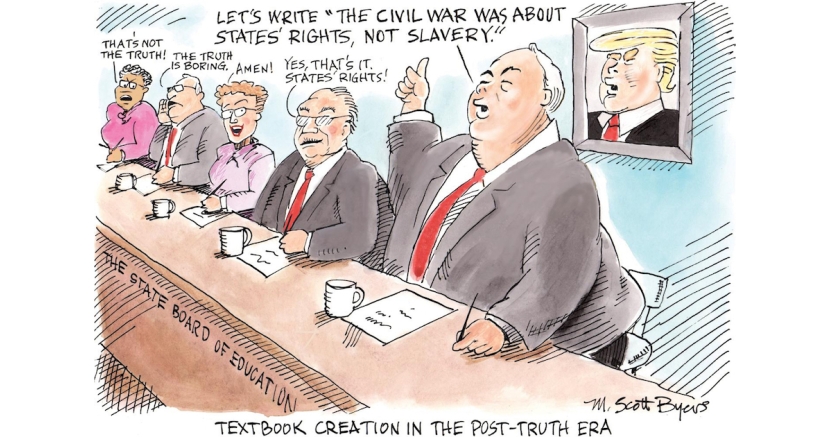 Given its most recent actions, it’s possible to believe for an instant that the State Board of Education shares an interest in satire with songwriter Randy Newman.

Newman’s song, “Sail Away,” is a devastating satirical tune about “a recruiter for the slave trade that helped to make it the great institution that it was,” as he described it. Newman has the recruiter paint a rosy picture of life in the chains of slavery:

In America, you’ll get food to eat

Won’t have to run through the jungle

And scuff up your feet

You’ll just sing about Jesus and drink wine all day

It’s great to be an American.

Now, here comes the state school board preliminarily adopting textbook standards for social studies that advance the long-discredited argument that the Civil War was fought over “states’ rights.” They must intend it as satire, right?

Apparently not. As Republican board member Pat Hardy of Fort Worth said, “States’ rights has a little more depth to it than slavery and that was one of the things the South wanted. They wanted a different form of government.” Oh, slavery is mentioned in the standards, too. But, you know, the issue lacks depth.

People may or may not be surprised to learn that the 15-member school board decided on what historical figures should be excluded or included in the standards kind of like the way “America’s Got Talent” picks winners and losers.

This year, Moses advanced for his piece, “The Ten Commandments.” He helped teach the Founders what laws are, they say. To the polite applause reserved for off-key losers, Helen Keller and Hillary Clinton were eliminated.

I recall quite clearly being taught in the 1960s that Communists were evil because they sacrificed truth to ideology. They falsified history textbooks for political ends. Even science wasn’t safe from Soviet and Chinese ideological zealots.

Either today’s hardcore American conservatives no longer believe Communism is evil, or their own ideological obsessions have blinded them to an evil they once saw clearly.

Seeing politicians plow up the fertile gardens of our children’s minds to plant their own weedy thoughts is alarming. In fact, an alarm is just what we need, maybe a new kind of Amber Alert: “Children’s Minds Kidnapped!”

This, of course, is just what the Right fears is going on in our colleges and universities. But let’s be clear. Judging by their behavior, it’s not the kidnapping of minds that the Right opposes. It’s what’s done with the captive minds that matters to them.

The state school board’s textbook carnival has long been an embarrassing spectacle Back in 2012, the nation saw a former board chair marking out the dimensions of Noah’s Ark in the yard to prove there was room on the boat for dinosaurs. It’s a wonder border walls weren’t popular long before now – along Texas’ northern border.

So far at least, Americans’ minds don’t stay kidnapped for long. Some simply forget their lessons. Also, encounters with the real world win out. You can see from an airplane that the earth’s not flat.

As a child, Helen Keller lost her vision, hearing and speech due to illness. What would she say today if she discovered that her name had been removed from the textbooks of Texas schoolchildren?

She would, certainly, smile at the vanity of those who believe they can on a whim add or subtract any human life from history.

Keller said, “Education broadens to include all men and deepens to reach all truths.” Those who believe the subject of slavery lacks depth are putting Keller’s belief to the test. As she said, “The only thing worse than being blind is having sight but no vision.”