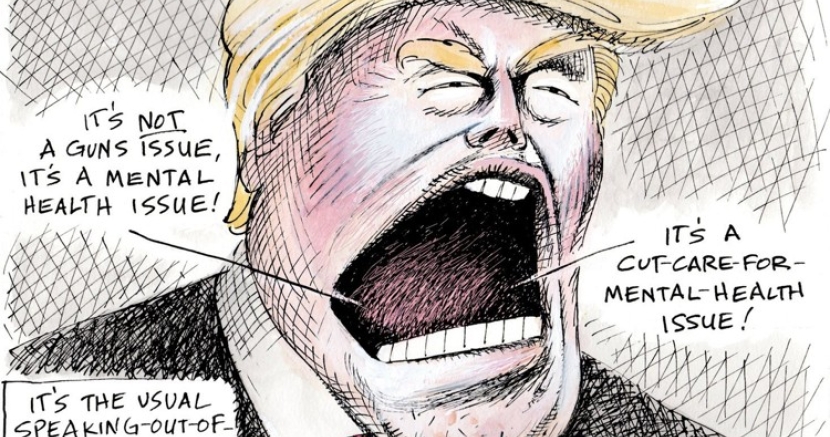 Health care either a fight or a right

If mental health is priority, then we need to back ACA

In the aftermath of the tragic killings in Sutherland Springs, President Donald Trump said, “I think mental health is the problem here. This isn’t a guns situation.”

If Trump believes that, why did he sign an executive order last month that could make mental health care less available? Trump ordered federal agencies to make new rules that would allow the sale of cheaper health insurance policies — cheaper because they provide less coverage for mental health and maternity care, among other services.

The question brings to mind an important fact that too many Americans want to ignore: The well-being of each of us is inextricably connected to the well-being of all of us.

The Trump administration is doing everything it can to sabotage the Affordable Care Act, a law that reduced the number of uninsured Americans from 44 million in 2013 to 28 million at the end of 2016. He cut funding for marketplace enrollment outreach by 90 percent. He cut health-care subsidies that made care available to Americans of modest income.

The ideology that drove Trump’s actions is that health care is not a right — that it doesn’t matter if millions get sick or die unnecessarily. Their deaths are worth their principle. After all, the ideologues believe, your health has nothing to do with their health. If they are healthy, why should they care how we are doing?

They should care because they are human beings — and civilization depends upon our caring for one another. Those who find it impossible to think that way could just take the selfish approach and understand that they are vulnerable to the illnesses and ill-health of their neighbors.

Trump is taking away health care while claiming that mental health issues are responsible for mass shootings like the one in the First Baptist Church of Sutherland Springs. By Trump’s own belief, then, aren’t cuts to mental health care just another way of loading the guns?

Texans will suffer more than most through the Trump administration’s assault on the ACA. That’s largely because we refused billions in federal Medicaid expansion money, refused to set up a state insurance exchange, and seem willing to do little for the less fortunate.

States with their own exchanges have extended the enrollment deadline, which in Texas will end Dec. 15 instead of in January. Republican leaders in Texas has done nothing on its own to make health care more available.

There are still 4.5 million Texans without health insurance. In Texas, more than 16 percent are uninsured — almost twice the national uninsured average of 8.8 percent. The number of uninsured Texans is likely to climb as insurers put premiums out of reach for many in the individual market to make up for the loss of subsidies for those of modest income.

It’s madness. Rather than attempt to address in advance the mental health issues of those who may one day commit violent acts, the answer we seem to prefer is just to arm all of them with the deadliest weapons available, leave them to their own nightmares on the street and see what happens.

Those who don’t believe that health care is a right might consider taking a victims’ rights approach. They are just as vulnerable to the consequences of others’ ill health as the rest of us are. They or someone they love might be the next victim of a shower of fire or a deadly disease that can’t be stopped because we’ve denied our neighbors the care that would stop it.