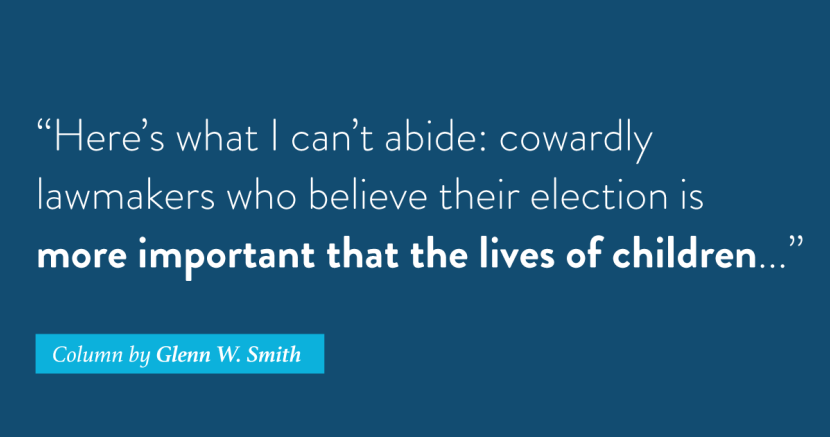 Money has stifled a meaningful conversation on guns in American life, and on other issues as well.

Let’s talk about guns, beginning with a couple of stories. When I was a teenager, our home in Houston was burgled one night as we slept. My mother’s purse was taken from the dresser in my parents’ bedroom. All of us slept through the intrusion.

When a policeman came the following morning to take a report, my father decided to sell the officer his .357 pistol. I’ll never forget Dad’s words. “It was probably some neighborhood kid we know, and I might have shot him over a purse,” he said.

Second story. Some years ago, I was managing a statewide political campaign when a reporter called about a rule allowing handguns in the state Senate gallery. I made a joke, wondering why Senate officials had banned use of cell phones in the gallery while permitting guns. “They’re more scared of phones than guns?” I asked with some sarcasm.

My mistake. The state and national rifle associations were after me in moments, complaining to the press that I clearly wanted to take all the guns away from law-abiding Texans. Oh yeah? Well, the humorless gun lobby will have to wait and pry the jokes out of my dead fingers. Or something like that.

I wish we would listen to law enforcement on matters of sensible gun laws. We did once, when we banned Teflon-coated bullets (knows as cop-killer bullets). I stand with the police.

These advocates have every right to make their arguments, to campaign for elected officials who share their views. Oh, I think they should step back and maybe think again about the deadly consequences of our gun-ridden world. Geez, even Wyatt Earp had enough sense to try and control the number of hand guns aimed at him, his deputies and the people they were supposed to protect.

Here’s what I can’t abide: cowardly lawmakers who believe their election or re-election is more important that the lives of children and others they are elected, at least in part, to protect.

Most of today’s lawmakers didn’t think much about guns before they decided to run for office. Oh, some did, and some are true believers, and I’ll let them hold to their true beliefs.

The real culprits are those who really don’t care about the issue but who take the money and kiss the asses of gun lobbyists for their own political gain. To do so, they have to believe that their presence in government transcends any actual real-world interest of Texans and Americans they are elected to serve.

This phenomenon is not limited to issues surrounding guns. It happens on issues of education, health care, even transportation, where road builders and concrete businesses have a lobby advantage over backers of alternatives like high-speed rail or other transportation solutions not requiring more cars and more highways.

Once again, it’s not that concrete manufacturers shouldn’t advocate for their businesses. The problem is the shortage of independent-minded lawmakers who will tell them to go to hell when public interest demands it.

We want to believe that all the legislative fights over key issues take place on an even playing field. That, my people, is a ridiculous fantasy.

We’re not engaged in any meaningful conversation over the role or presence of guns in American life. Gun lobbyists stifle (rhymes with rifle) such conversations. Figuratively, they are holding guns to the heads of all us, our children, our grandchildren, our mothers, fathers, lovers and friends.

Cross us, they say, like all powerful lobbies say, and we will end your political career. Got that?

Guns won’t be the end of democracy in America, though the ongoing loss of innocent young lives because of our inaction does make us question its contemporary dysfunction. But the reduction of democratic decision-making to a bidding contest among the wealthiest special interests just might bring the curtain down on us.

My father was a conscientious, independent Republican who made up his own mind. Where is the lawmaker today with the good sense my father possessed when he rid himself of a deadly weapon rather than risk tragedy?