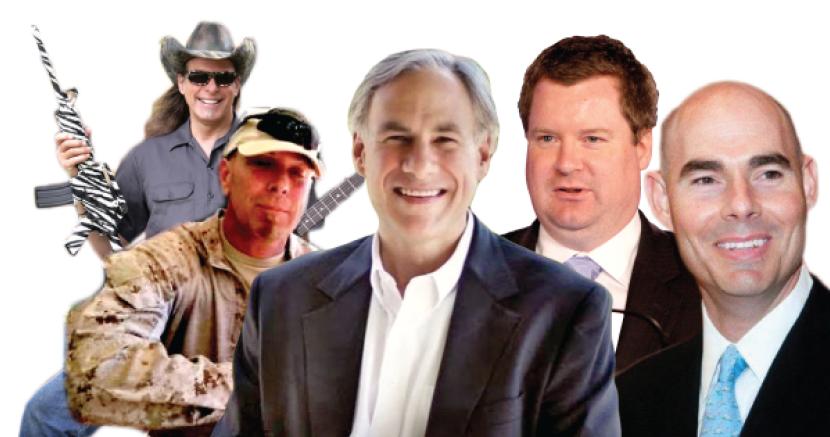 Greg Abbott Pals Around With Some Creepy People

Over the years, one thing I've heard people say about political candidates is that "they'll be good leaders if they surround themselves with good people." It tells you something about the central figure: the company they keep is a reflection of themselves.
In the race for Texas Governor we've seen Republican Greg Abbott associate himself with a cast of characters that are unlikely to be invited to anyone's house, so why would we invite them to have a direct line into the State House?
Here is a quick list of who Abbott has surrounded himself with this year:
Ted Nugent, a rock and roller who is now better known for inflammatory comments than he is for playing the guitar. Earlier this year Nugent had to apologize for calling President Obama a "subhuman mongrel." When a reporter asserted that such phrasing was Nazi terminology, PolitiFact looked in to the claim and rated it true. Abbott hosted Nugent at a campaign event, leading media from all around Texas to question Abbott's judgement, with the Texas Monthly writing that "it reveals Abbott, at the very least, as someone who doesn't have acute political judgement."
Eric Erickson, the editor-in-chief of RedState.com and the man who coined the phrase "Abortion Barbie." Abbott appeared at the Red State Gathering in Fort Worth early this year. Erickson's 2014 greatest hits go on to include public statements such as "the male of the species is dominant," and that women who work are "hurting children, and it's going to have impact for generations to come." He continued that "I don't view it as judging, I view it as a statement of fact." Even the conservative Fox News took him to task on these comments, when host Megyn Kelly gave him the what-for.
Dennis Bonnen, the Speaker Pro Tempore of the Texas Legislature, who was worked together with Abbott for years. Over the summer Bonnen apologized after being recorded using a racial slur during a committee hearing while referring to child refugees from Hurricane Katrina.
Kevin Lyndel "K.C." Massey, who posed with Greg Abbott for pictures just last week. Four days later, Massey was arrested for stock piling illegal weapons and a box that is suspected to be filled with ammonium nitrate - the chemical that caused the widely-reported explosion in West, Texas in 2013. In a predictably outrageous move, Abbott's campaign has declined to say whether he supports this group or not.
Anti-Choice Groups that stalk patients. Greg Abbott has positioned himself to be staunchly against abortion, leading the state's lawsuits and appeals to defend a law intended to shutter abortion clinics. Earlier this year, we released undercover audio of intimidation tactics utilized by these extremists, including what they called a "sophisticated spreadsheet" to track license plates and the descriptions of people coming and going.
I could go on, but instead I'll just leave you with one of our Top 10 lists showing some of the terrible things his supporters have said about Wendy Davis this year. Seriously, these guys.
"But if he surrounds himself with good people..." Well he isn't doing it now, what makes anyone think he'll do it as governor?
Tags:
Greg Abbott
2014 Election
Ted Nugent
Abortion