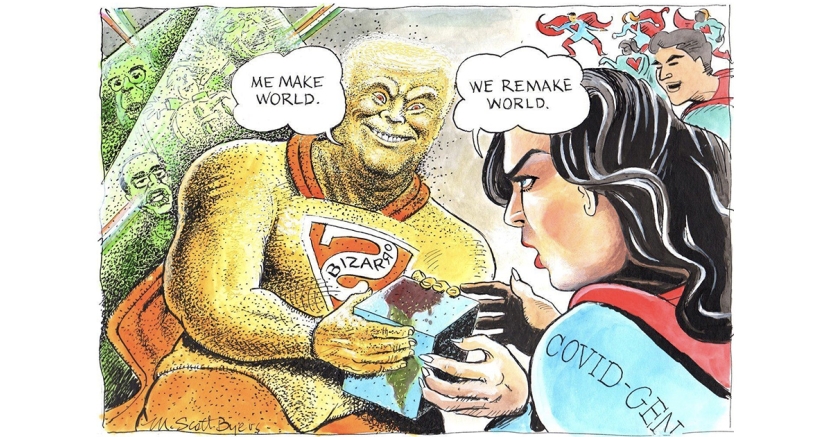 For Graduates of 2020: Youth in hospitable and inhospitable worlds

Illustration by M. Scott Byers
Rebuild the world with understanding that your freedom depends on the freedom of everyone else. Selfishness helped get us into this mess.

Generational generalities are odious, by and large. Informal marketing categories — Boomers, Millennials, Gen-this and Gen-that — divide us along spurious lines and overlook great complexities we face as individuals during our time in the barrel.

Still, it’s true that generations come of age in different circumstances that are pointedly beyond their control. In 2020, the circumstances faced by high school and college graduates are daunting. Crises seem to intensify by the day.

To get a fair picture, let’s measure today’s challenges against a description of my own era.

I was born in 1953 as the polio epidemic raged. The year before, the number of U.S. cases had peaked at about 58,000. More than 3,000 had died. Tens of thousands more were left with some form of paralysis.

But, as Paul Simon sang, this was the age of miracle and wonder. An effective vaccine arrived in 1955. Its inventor, Jonas Salk, refused to patent it. Drug companies distributed 400 million doses over seven years, reducing the cases of polio by 90 percent.

Much has been made of post-war babies growing up under the shadow of the bomb, being taught in school to “duck and cover” during rather insane nuclear war drills. And, it’s true that during the Cuban Missile Crisis of 1962, we cast a suspicious eye on every airplane that flew over our Houston neighborhood.

The Cold War brought benefits to us, too. The Russians launched the Sputnik satellite in 1957. Suddenly, public education in the U.S. was at the top of policy makers’ list. Federal spending on public education doubled during the 1950s and 1960s. While some of that was due to increasing enrollment, improvements in the quality of our education were rapid. We weren’t to be outrun by our Russian counterparts.

The 1960s brought the Civil Rights Act, the Voting Rights Act, steps toward gender equality, and an economic boom. Despite the Vietnam War, we felt a sense of unlimited possibilities.

President Richard Nixon created the Environmental Protection Agency in 1970, and air and water quality in America began to improve.

Today’s youth face circumstances that are like a “Bizarro World” version (see Superman comics) of the post-World War II decades.

A pandemic much more deadly than polio rages. The economy is faltering. Schools are closed. America seems in retreat on all fronts, including on matters of economic and social justice. The EPA is being dismantled.

The powerful are building walls along our borders and around our lives.

And yet, by all signs the hope and determination of 2020 graduates matches that of those who overcame a Great Depression and the rise of global fascism. Today’s youth may well face those twin evils again.

The future might be brighter if my age cohort takes the advice of younger folk rather than try to give advice to them. I can only urge 2020 graduates to rebuild the world with understanding that their freedom depends on the freedom of everyone else. Selfishness helped get us into this mess.

One more thing: When a COVID-19 vaccine is found, insist its discoverers refuse a patent and distribute it freely around the world. Defeat any political leader who says otherwise.

Biden to Republicans: Stop kicking the can down the road on Medicaid
4 days ago

Republican Briscoe Cain is in over his head
5 days ago