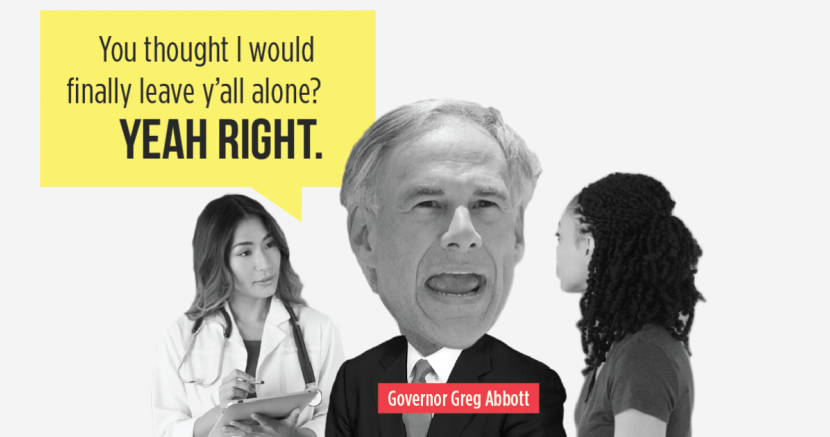 Ace Elliott
Texas newest plan to deny women access to abortion care is as creepy as it sounds.

Update 11.04.16: The Department of State Health Services (DSHS) set a public hearing for this outrageous rule for November 9, 2016 — the morning after Election Day. Click here for information about this hearing.

Just one month after the Supreme Court struck down two parts of Texas’ most restrictive anti-abortion law, Governor Greg Abbott set into motion a medically unnecessary rule that would require Texas women to bury or cremate fetal tissue after an abortion or miscarriage.

The rule under consideration by the Department of State Health Services (DSHS) is modeled after an Indiana fetal burial restriction, signed into law by Governor of Indiana and now Republican Vice Presidential candidate, Mike Pence. That Indiana restriction — part of an omnibus anti-abortion law — was blocked from going into effect by a federal court citing the Supreme Court’s landmark Texas decision.

Despite the precedent set in Indiana — and contrary to the stance of the medical community —  Abbott falsely claims the new rule is in the “best interests of the public health of Texas.” The Texas Medical Association, the Texas Hospital Association, and the Funeral Consumers Alliance of Texas have said that the proposed rule is completely unnecessary.

The manner in which the rule —  which would change a disposal procedure that has worked without incident for 20 years — is being proposed is as suspect as Abbott’s justification. Abbott, determined to bypass the state legislature, asked the Executive Health Commissioner Charles Smith to “evaluate potential changes to portions of the [DSHS] rules that pertain to disposition of fetal remains.” By doing so, Abbott quietly pushed his platform without the possibility of legislative opposition.

This proposed rule do nothing to fix any real problems in our healthcare system, if anything, it creates more problems.

The first and biggest problem brought up by medical professionals is the cost associated with burial or cremation. On average, the cost of cremation or burial is $2,000, resulting in over a $100 million in fees for Texas women annually. Hospitals and reproductive health care providers will likely not be able to absorb the extra cost and the fees will fall onto the patients, and ultimately, the taxpayers.

The second issue centers around the size of fetal tissue. For most women, abortions and miscarriages occur within the first trimester when the fetus is so small that it can be hard to isolate the tissue.

The good news is that opposition to this medically unnecessary rule is fierce and widespread.

The public opposition is fervent. The DSHS underwent a 30 day public comment period in which citizens concerned with reproductive rights showed their outrage. More than 12,000 comments were submitted in the first round of public comment. DSHS has since amended the rule slightly and is accepting public comments through October 31.