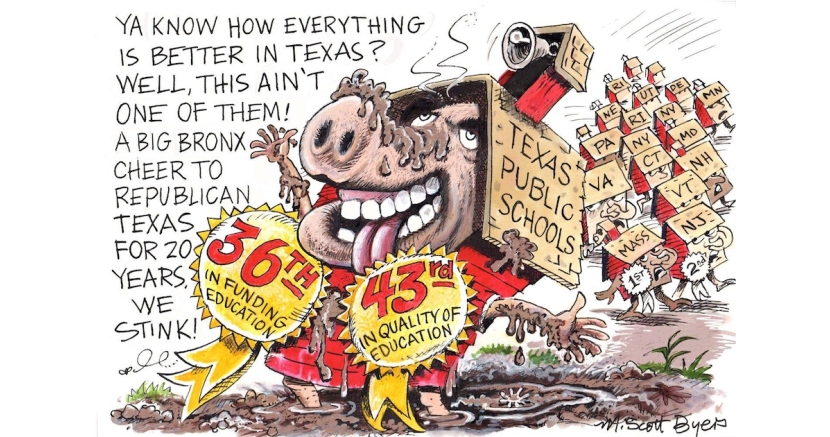 Fund the schools but cut the strings

Most would say, take the money and assume we have the wherewithal to figure out later how to sever the strings. Still scary as a teen horror movie, but at least it’s going for the monster before the monster comes for you.

The Texas Legislature has been to public schools what pay day lenders are to the poor and middle class. They’ve made sure that the further schools go, the more behind they grow.

Since taking over all of state government more than 20 years ago, Republicans have been dead-beat dads of public school funding. Of course, behind on support, legislators then blame those they’ve stiffed rather than accept responsibility.

This is why “performance-based” funding — part of the cat’s cradle of attached strings — is so popular with them. Before anything else, it obscures lawmakers’ own performance and points fingers at the kids (and teachers) they’ve starved.

Still, increasing the state’s share of school funding would take some pressure off local property taxes, which now pay for some 64 percent of public school budgets. A few years ago, local districts had to cover just 48 percent of the school tab.

Also, the leadership is talking about attaching another big string. It’s really more like a noose. They want to restrict the revenue-raising abilities of local governments.

To sum: The state starved public schools to the point of malnutrition and sickness. Now the state says, “OK, here is some medicine but only those of you who get well fast can have it. Oh, and by the way, no fair trying to catch up by raising more money locally.”

Here’s a surprising recommendation: State legislators need to think more like children. (Bet you didn’t see that coming!) To clarify, they need to imagine themselves once again as students in the schoolhouse. Lawmakers, imagine that it’s your education that’s at stake. Would you sell yourselves short?

You wouldn’t. You’d probably say something like, “Quit it with all the byzantine funding schemes. Pay my teachers like you understand they have civilization’s most important job. Keep my textbooks accurate and up-to-date, and, above all, take my individual life circumstances into account.”

Here is a recommendation for addressing public education funding. First, simplify (remember when we learned simplification in math class?). Start by figuring what schools need to do the job. Second, see the need through the eyes of children, parents, teachers — not through the eyes of a pay day lender.

When we simplify, we find that our “greatest common factor” is each other. Teach the children well because it’s the only way to learn.