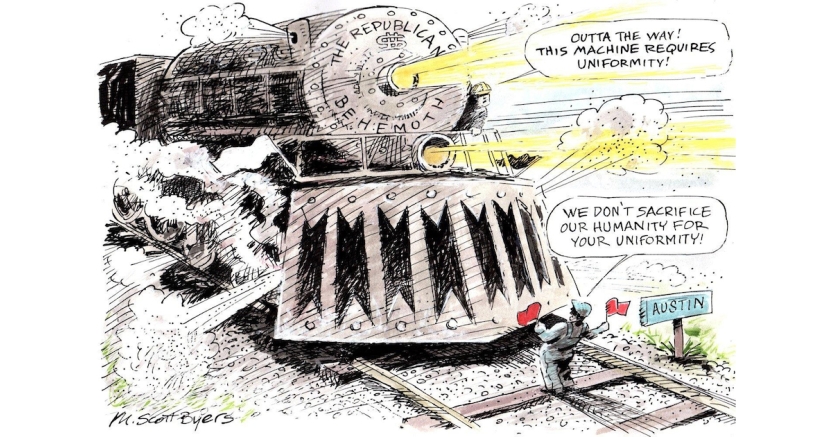 The issue of paid sick leave is a good one to explore the question: “Who are the real collectivists?” The answer, my maybe-not-so-rugged individualists, are today’s Republican Party leaders.

In 2018, the city of Austin approved a moderate ordinance that required businesses with six or more employees to allow those employees to earn — earn — sick time off. In other words, they could bank hours against a future illness that required them to miss work.

Notice that the ordinance is aimed squarely at protecting an individual employee, emphasis on individual. There’s the difference between the progressive values of responsibility and compassion and a conservative ideology that has erased the unique individual from its theoretical collective of people. The Right’s cloudy thinking leaves out the raindrops.

It’s today’s Republican leadership that thinks in terms of abstract collectives while progressives tend to focus on actual human beings. This is obvious in the progressive drives for access to health care, excellence in public education and living wages that families can get by on.

Also, only the right wing of American politics could applaud the kidnapping of children from their mothers at our Southern border, disappearing the innocents into distant cages or faraway, undiscoverable foster situations. This can be Trump Administration policy only because distinct, individual lives have been abstracted into conservatives’ ideological, collectivist categories.

Today, the right wing is once again trying to label liberals as “socialists,” something it has done with little success in America for 150 years or so. It’s true that theoretical socialism, as an ideology requiring enforcement from on high, makes the mistake of abstracting out individual human lives. It is also the case that theoretical socialism has nothing in common with current progressive goals or practices.

And, as noted, that is nowhere more obvious than in modest efforts at seeing to the health and well being of low wage earners.

Another odd argument from opponents: Employees don't often use the sick leave they've accrued. That should eliminate worries from small businesses that employees will take advantage and call in sick when they are not, leaving the employer short-handed.

Republicans can make these arguments because they live high in the abstract world of ideology and not in the flesh-and-blood world of our daily lives. Republicans object to paid sick leave ordinances because they appear to violate their pure market ideology. In this, the myth of the free and pure market takes on the ideological tarnish of theoretical socialism.

What could be more reasonable and more focused on individual liberty and health than a simple requirement that workers can earn sick leave so they don’t have to come to work when suffering from the flu?

Only an ideologue who has lost sight of actual humanity could argue against it.