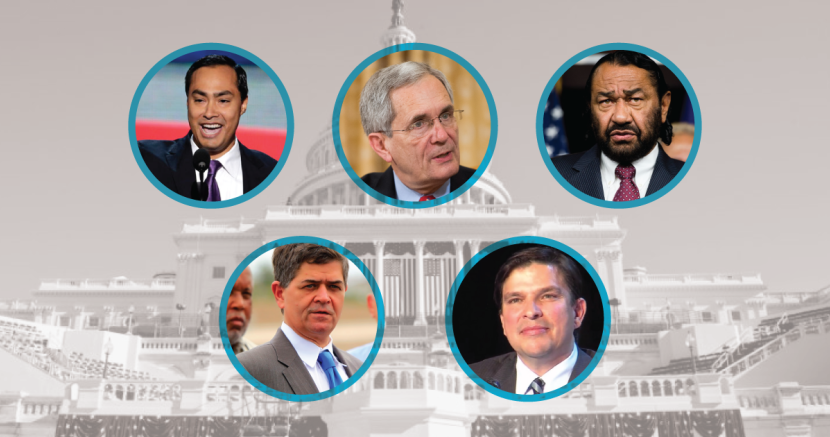 Five members of Congress from Texas added their names to the list of representatives boycotting Donald Trump’s inauguration this Friday. Texas Reps. Joaquin Castro of San Antonio, Lloyd Doggett of Austin, and Al Green of Houston joined the boycott after Trump’s most recent Twitter attack on Congressman and civil rights leader John Lewis. Filemon Vela of Bownsville and Vicente Gonzalez of McAllen joined the list after reports of racially discriminatory actions taken against constituents by inauguration attendees.

A longtime critic of Trump, Rep. Vela was vocal in his criticism of Trump’s plans to “build a wall” on the border and described his final motivator for joining the boycott:

"Then, Donald Trump made his final cabinet selection ensuring that there would be no Hispanic representation in the cabinet for the first time in 36 years.”

Nearly 60 congressional Democrats nationwide are not attending the inaugural events. Echoing their fellow Democrats, Rep. Green said this was a decision of conscience for him, while Rep. Castro, Rep. Doggett, Rep. Vela, and Rep. Gonzalez cited Trump’s repeated disrespect and divisiveness towards so many Americans as their reasoning for joining the boycott. In a statement, Castro explained:

“I come from a family and a place, Texas, where respect is a fundamental value – respect for people regardless of what they look like, where they were born, or whether they share your view of the world. Donald Trump has shown an utter lack of respect for so many Americans. His attack on civil rights hero John Lewis is the latest example."

These representatives are standing up to send an important message of resistance to Trump’s agenda of hate. Check out our Guide to Inauguration Resistance Events in Texas and join the resistance.