Fate of the Golden Door--Trump and Immigration 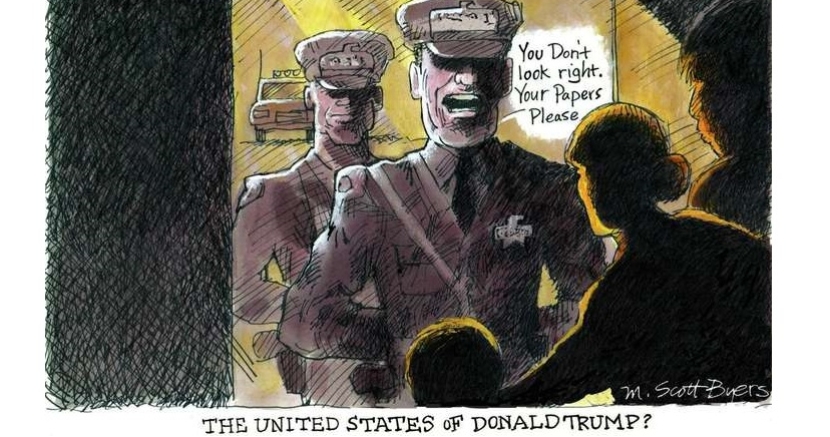 Trump’s dreams, true or false, are real nightmares for Latinos, Muslims and other targets of his cruel and abusive threats.
Ed. note: The following column was originally published in the Austin American-Statesman. Image is an original illustration by artist M. Scott Byers.
We wrap our words for pathways to hoped-for futures in metaphors of treasure. Immigrants came to America through the “Golden Door” of Ellis Island. Christians speak of entering heaven through “Pearly Gates.”

Doorways to or from other worlds have often received special names. Ancient Greeks spoke of false dreams coming through gates of ivory and true dreams through gates of horn. This raises a question: Do Donald Trump’s dreams of deportations and immigration crackdowns pass through horn or ivory?

It matters to his targets. Trump speaks of deporting 2 or 3 million undocumented criminal immigrants. There aren’t nearly that many here. Does he mean it? Is he serious when he promises to build a great wall to keep out those he believes are unworthy? What about his inconsistent demands for a ban on Muslim immigrants?

How about the talk of a mandatory registry of all Muslims in America? Is he really dreaming of a special police force to knock on doors, peer in windows and set neighbor against neighbor in a massive witch hunt?

Trump’s dreams, true or false, are real nightmares for Latinos, Muslims and other targets of his cruel and abusive threats. The nightmares hurt. They do real damage. Forget the horn and ivory. To those they harm and those who care, they have entered America’s psychic bloodstream through a gate of hell.

We should believe what Trump says, says journalist Masha Gessen, an expert on Russia’s Vladimir Putin. It’s her first rule of surviving autocracy: Take the autocrat at his word.

Trump’s targets are smart enough to know his words are not really about “immigration reform.” He means to profile and demonize people who look a certain way, regardless of their legal status.

There is a temptation to believe otherwise, to conclude that Trump was just pandering to the hateful few in order to win an election. Many of his voters are good people who appear to have given in to that temptation. They just want “to shake things up.”

That’s a mistake. Trump is only the president-elect, but already America is a different place. We can see the difference in the tears of his targets and in the disappointment and dread felt the around the world.

America has not always been kind to its immigrants. It’s somewhat of a pattern that yesterday’s immigrants who have become today’s citizens look down upon today’s immigrants. Still, to the hopeful around the world, we remain the land of the Golden Door, a welcoming place of safety and opportunity. If we have not always been that in reality, we represent the ideal — and many fight to keep it real.

Trump and the virulent anti-immigrant forces that support him put that image of America at risk. To those around the world hiding from death squads and slave runners, we at least gave hope that a Land of Promise might exist. Until now.

Trump could stop short of his plan and simply fake more aggressive immigration enforcement with hyped pictures of raids and deportations. He could make his dreams seem real and possibly satisfy his rabid base. But that’s like wishing for the diabolical over the wicked.

He can’t achieve his goals without ripping apart families, driving productive workers into hiding, putting lawful immigrants at risk of vigilante violence because of their skin color, and forcing local police to abandon public safety duties to serve as his immigration army. And all of it will cost billions of dollars.

Here in Texas, which shares a 1,250-mile border with Mexico, he would wall off our economic future as much as he would wall out his imagined undesirables. Texas would likely become the center of Trump’s police state.

We need immigration reform that includes a federally secured border and a pathway to full and equal citizenship. Texas could only gain from such reforms. As noncitizens, those here without papers pay taxes — but they don’t receive government benefits. And they don’t vote, despite the fevered fantasies of some.

Those here without papers who commit crimes? They are already deported when caught. Still, Trump’s allies in Texas and elsewhere talk of nationalizing our local police to execute their costly and inhumane plans.

What becomes of the Golden Door if those plans become reality? There appear to be some gold-colored doors in Trump’s Manhattan penthouse. So there’s that.