Don’t write your Constitution in a panic 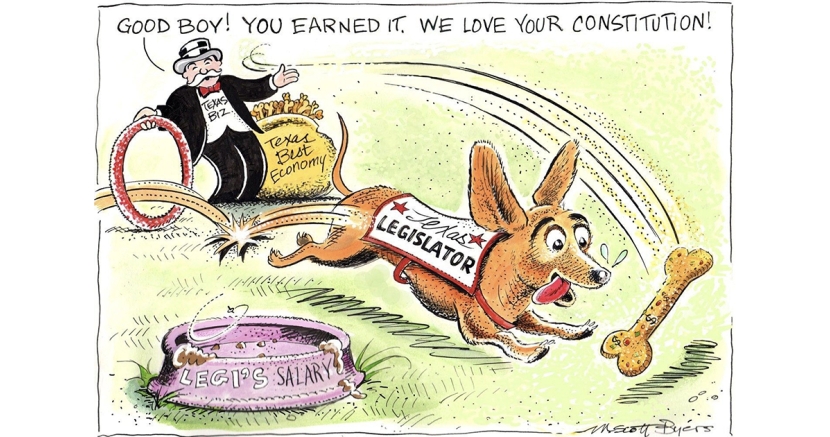 Glenn W. Smith
Every couple of years we have to vote on constitutional amendments that, in a land ruled by reason, would probably be welcomed with the friendly, non-constitutional agreement of all.

Let Texas send a message to governments of the world: Do not under any circumstances adopt your constitution in the middle of widespread panic.

That’s what Texas did in 1876, right in the middle of the international economic crisis known as the Panic of 1873. The result was a Texas Constitution written almost as punishment for those blamed for the hard times: Reconstruction government, railroads, banks and other large financial institutions.

The Constitution was meant to constrain power on behalf of a democratic people. It didn’t quite work out that way.

Every couple of years we have to vote on constitutional amendments that, in a land ruled by reason, would probably be welcomed with the friendly, non-constitutional agreement of all.

For instance, this year we had to vote to approve a constitutional amendment to allow handlers and family caretakers to adopt retiring law enforcement animals. The proposition passed by a vote of 1,845,766 to 123,032.

This might make you wonder just who are the 123,032 people who voted against Proposition 10 and aging police dogs. Well, they kind of fit the profile of the Texans who adopted the Constitution, who apparently distrusted just about everyone.

In the decades that followed, railroads, banks and other large financial institutions fended off those who would house-train them, the angry Texas farmers and populists who penned the Texas Constitution.

The rest of us must make-do with a part-time Legislature that meets in regular session for only 140 days every other year. Lawmakers get paid a little more than $20,000 a year, including per diem, for their service.

Here one can see a great example of the Law of Unintended Consequences. Underpaid legislators had to turn to someone to help them make ends meet, and, lo and behold, there were the railroads, banks and other large financial institutions ready to lend a friendly hand.

And that, fellow citizens, is how banks, railroads and other large financial institutions avoided house-training. They house-trained their would-be keepers instead.

See what we mean about adopting a Constitution in the middle of a crisis? A Constitution meant to limit the powers of institutions seen as betraying the people in the economic crisis of the 1870s wound up empowering those same impersonal forces.

Let’s close with a look at 2019′s Proposition 4, which prohibits a state income tax and passed with 76 percent of the vote. We already stipulated in a Constitutional amendment passed by voters in 1993 that there would be no income tax unless approved by voters.

Many viewed Prop 4 as a stunt, a political message on behalf of the big rich to keep the tax burden in Texas fastened to the bent backs of the middle class and poor.

Such redundancies and Amendments Designed as Political Advertising are another reason the Texas Constitution is close to 90,000 words long and includes more than 500 amendments.