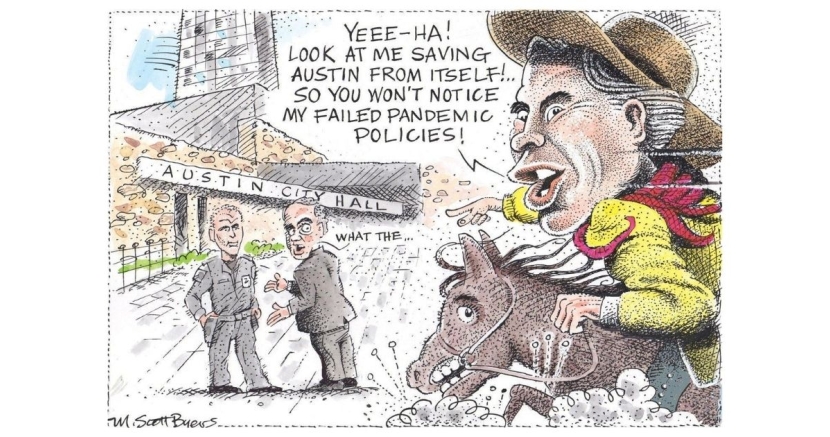 Glenn W. Smith
Abbott and other Republicans are trying desperately to distract us from their tragic public safety failures during the coronavirus pandemic.

No one should take Gov. Greg Abbott seriously when he threatens to strangle the budgets of local governments should they reallocate money from law enforcement to, say, mental health services and take unwanted burdens off the police.

Recently, Abbott has threatened to take away annexation powers and even erase prior annexations from cities that dare to reassess or reform law enforcement spending. Of course, it was Abbott who signed a bill in 2019 that limited revenue for local governments by requiring voter approval of tax hikes above 3.5 percent.

Police unions strongly opposed that action, knowing their budgets were put at risk. But back then, Abbott didn’t seem as concerned about the fate of police budgets.

Abbott also said he’s considering a proposal for the state to take over the Austin Police Department after the Austin City Council reallocated some law enforcement spending. He hasn’t said where he would find the $300 million-to-$400 million year it would cost the state to do that.

Local police don’t get enough credit for the everyday burdens they carry – promptly answering calls from people who say, “I heard a noise outside,” ferrying lost souls in need of mental health care to the proper caregivers, responding to all our nervous concerns day and night.

It’s not likely that Texas Department of Public Safety troopers want to take on those jobs, which are essential to local policing and to our safety and sense of well-being.

No, Abbott’s threats are not serious. It doesn’t help that he exaggerates a macho style when he delivers them. Abbott looks a little foolish in the Clint Eastwood “make my day” role. That’s all the rage among Republicans in the Donald Trump era, it seems. It’s like they all got “work” done on their faces to strengthen their jawlines.

Abbott’s “back the blue” bit is all talking points, and dull, blunted points at that. Still, while we shouldn’t take them seriously, we should pay attention because Abbott and other Republicans are trying desperately to distract us from their tragic public safety failures during the coronavirus pandemic.

Why would anyone believe Abbott was going save them from a mugger while his pandemic policies failed to save the lives of their family, friends and colleagues? If public health and safety is his concern, why did he initially ban local mask ordinances (he later issued a mask order of his own) and open the Texas economy so quickly he caused a spike in disease spread and deaths?

Still, to some degree, his law-and-order posturing might work in a public relations sense. It’s a new shiny object, some media are weary of daily reporting on the pandemic, and crime news of any sort grabs attention because evolution has wired us to look for danger. Crime sells.

Abbott points a finger at the city of Austin’s police budget decisions, with alarmist language that exaggerates the potential effects of the reallocation of some police budget money. He and many Republicans throw around the “defund” word like it means eliminate the police. No Democrat supports that, of course.

Abbott and his allies are making up a problem and then offering solutions that will never come to pass. The Legislature is not going to destroy local budgets by de-annexing parts of their tax base to punish them for reallocating money within their already strapped budgets.