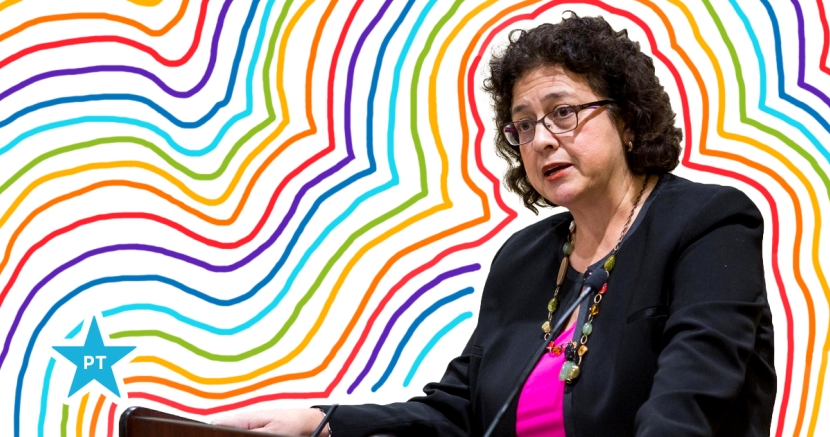 Representative Celia Israel’s voice cracked as she emotionally laid out her bill,

"I ask you, on behalf of 9-year-old Celia. All I wanted to do was perfect my turnaround jump shot...I also ask you on behalf of 17-year-old Celia, who nearly ended her life... I thank God I was not the subject of this type of conversion therapy. Then again, I did not have the courage, as a minor, to speak the words, 'I'm a lesbian.’” (full video below)

Celia Israel (D-Austin) is in a years-long fight to end the dangerous practice of gay conversion therapy.

“We don’t need fixing. We need protection,” she said.

Sometimes known as “reparative therapy,” conversion therapy is comprised of a whole slew of discredited therapy practices that claim to be able to alter an individual's sexual orientation or gender identity and expression. These practices have no basis in science and only seek to shame LGBTQIA+ folks into lying about their identity.

In the past seven years, 16 states and Washington D.C. have banned conversion therapy for minors with bipartisan support across the country. This could become a reality in Texas with Israel’s House Bill 517, which would prevent state-licensed therapists and counselors from attempting to change a minor’s sexual orientation or identity.

For young people, this shameful practice can have devastating consequences. Minors who have survived reparative therapy practices face higher levels of depression, anxiety, drug use, homelessness, and suicide.

This practice also has been rejected by every accredited medical organization, but biases and discrimination against the LGBTQIA+ community have allowed these therapies to fester and target an untold amount of queer youth.

For two previous sessions, the legislature wouldn’t even give Israel’s bill the courtesy of a committee hearing, but this year, things are changing.

Israel’s bill finally had a hearing last week, marking a critical step in the bill's chances of becoming law. This step is the result of incredible changes in the Texas Legislature brought upon by the 2018 midterm election of progressive legislators who are championing equality.

This progress is also fortified by this session’s creation of the first-ever LGBTQ caucus created by the five out members of the legislature and their allies. These champions are not just pushing back on legislation that targets and isolates the LGBTQIA+ community, but are pushing forward a proactive agenda that will ensure equity for all Texans.

Following a successful hearing, Israel’s bill to stop gay conversion therapy in Texas has been left pending in committee, all but ensuring it won’t be passed this session. But, Celia Israel doesn’t see this as a failure.