Democrats Shook Up the Texas Primaries. Now Finish the Job. 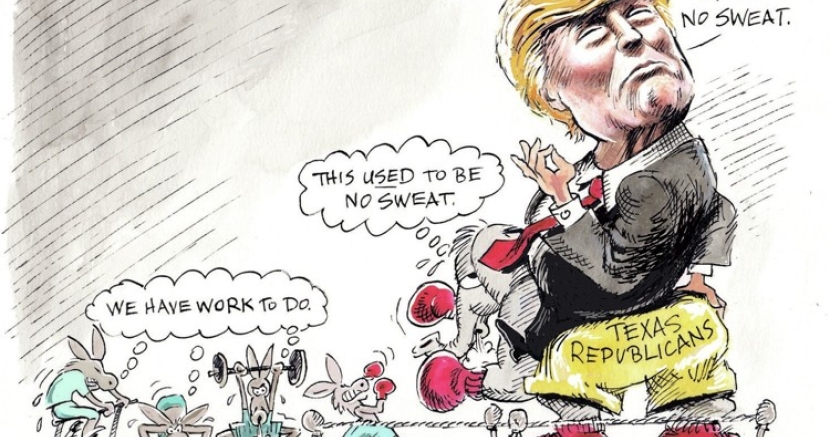 Image Credit
Illustration by M. Scott Byers
Glenn W. Smith
There are signs that Democratic candidates, voters, activists and operatives are ahead of the curve on this.

If the enthusiasm behind high voter turnout levels in the Texas Democratic primary is any indication, 2018 may be the year Republican political dominance in the state begins to slip.

Yeah, yeah, we’ve heard that before. And, there is a kind of “Honey, I promise to reform, I promise” quality to the regular pledges from Democrats that we’re on the way to a new blue heaven. There will come a day, however, when the promises are met and the predictions comes true. The question is when.

Back in 1978, no one believed Republican businessman Bill Clements stood a chance of defeating Texas Attorney General John Hill, a popular Democrat in what was then a Democratic-dominated state. But, when the votes were counted, all the work Republicans had been doing for years behind the scenes paid off. Clements had won.

Of course, the GOP had a strong tailwind back then to take advantage of. Southern resentment over the 1960s Civil Rights Act and Voting Rights Act had given Republicans the arguments they needed to coax moderate and conservative white voters away from the Democrats. Texan Lyndon Johnson had predicted as much even as he signed the historic new federal laws.

The rise of the GOP here was largely a cultural phenomenon based to a large degree on racial tensions. It’s not like the conservative and moderate Democrats in charge of Texas were profligate tax-and-spenders, soft on crime or otherwise out of step with the citizenry.

The point is, Clements’ victory in 1978 was a surprise. And the first Democratic candidate to win statewide in Texas since 1994 will also be a surprise. That surprise could happen this year in one or more statewide races. General election polls won’t call it, mostly because this year’s election depends so much on relative levels of enthusiasm among partisan voters.

Turnout in the Republican primary was relatively flat compared to previous years. If Donald Trump hasn’t somewhat demoralized some members of the GOP club, then nothing will. As noted, polls may not accurately pick up on the phenomena ahead of time as respondents just give their habitual partisan answers – answers that don’t match their subsequent voting behavior.

Democratic turnout in the primary skyrocketed. This, combined with the overwhelming number of new candidates in places Democrats failed to contest in recent elections – all of this points to an enthusiasm gap in Democrats’ favor.

But, Democrats need to guard against the notion that momentum is to be found in numbers and spreadsheets. Evidence of momentum may or may not be found there, but momentum is only found in the hearts of actual human beings.

In other words, Democrats shouldn’t rely on any tailwinds from anti-Trump sentiment or demographic changes in the state. Democrats are going to have to row themselves to the farther shore.

There are signs that Democratic candidates, voters, activists and operatives are ahead of the curve on this. There’s been a lot of hard work, much of it behind the scenes. And, there’s been less bragging about the hard work, a sign that the work comes first.

No, it’s the hardworking volunteers and underpaid staffers who make the difference in our political outcomes, though we might now have to leave room for differences made by the interventions of hard-working Russians. I kid.

Democrats have nominated a powerful collection of candidates at all levels this year. Of course, that’s happened before without major success. Still, Democratic enthusiasm as evidenced in the party’s primary has not been this high for many years.

The Republicans in power have moved so far to the right that the flat-earth believers among should be worrying about falling off.

It was the perceived extremism of civil rights successes that handed Texas to the GOP. Will the real extremism of today’s Trump-led GOP give Democrats a chance? Hard work could make it happen.