Democracy? Bag it, say the Republicans 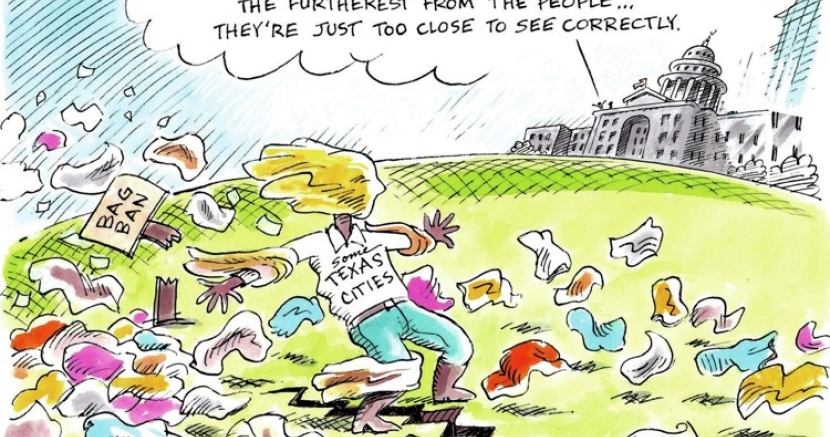 Image Credit
Illustration by M. Scott Byers
Glenn W. Smith
Why is the GOP so obsessed with plastic bags?

The urgent love Texas Republicans feel for plastic bags is a mystery. Let’s look, though. Maybe there’s a clue in the trail left by former Texas congressman Tom Loeffler all the way back in the 1980s. The game is afoot — literally.

As a candidate for governor back in 1986, Loeffler confessed that he had worn plastic shower caps on his feet in his San Francisco hotel room so he wouldn’t catch AIDS.

One never knows when a plastic bag — from a grocery sack to a shower cap — will fill an emergency need, and maybe that’s why the Republican-controlled Texas Legislature last year outlawed local ordinances that ban single-use plastic shopping bags.

As you might imagine, lawsuits ensued. The city of Austin has had a bag ban since 2013. The Texas Retailers Association sued to block the city’s ordinance but dropped the matter. Two years later, a study concluded that Austinites used 200 million fewer plastic bags annually.

Always ready to repeal or subvert any law that might protect our shared environment, Gov. Greg Abbott and his band of Republicans came to the rescue of the beleaguered bag people of Texas.

It is “local voter overreach” that has raised the hackles of Republicans. Voters choose the local officials who make the ordinances and, in some cases, adopt the ordinances by public vote. Abbott, Lt. Gov. Dan Patrick and others can point fingers at local officials, but what they are really doing with their all-out assault on local control is disenfranchising local voters.

Silly you. You thought you could help shape your towns and neighborhoods in ways that fit your values. It seems that in the governing philosophy of today’s state Republican officials, we are free just so long as we do what they tell us to do.

Remember that test we all have taken, probably several times, that involves identifying the item doesn’t belong in the series? Here, take it again:

The list involves entities and issues that the Legislature felt had been treated unfairly by local voters. Two of them, plastic bags and fracking, are related to the oil and gas business. So, there’s that. This is Texas. It’s the oil business. End of contest.

Patrick lost his crusade to control who could use which public restrooms and under what circumstances that use would be allowed. He was irked that locals were accommodating transgender folks in their bathrooms, which, of course, we’ve been doing without incident since there were public restrooms.

Ride-sharing companies succeeded in outmuscling local governments. They persuaded legislators to outlaw local ordinances intended to ensure public safety in the “ride-share space,” as they say. That proved, as if proof were necessary, that when the Texas Legislature sets out to take us for a ride we should put on our traveling shoes.

The Legislature overturned local ordinances regulating fracking, a drilling practice some say is setting fire to their drinking water and causing earthquakes. How arrogant and selfish must we local folk be to address such inconveniences on our own?

A goodly number of local voters in Texas towns have their plastic bag ordinances riding on the Laredo court case. We should have known that the Bag Men prowling the halls of the Capitol with their bags of plenty for lawmakers would not surrender to actual voter preferences.

What do we think this is, anyway? A democracy? The Republicans seem to prefer that we bag that idea.