Is deja vu covered under the Affordable Care Act? 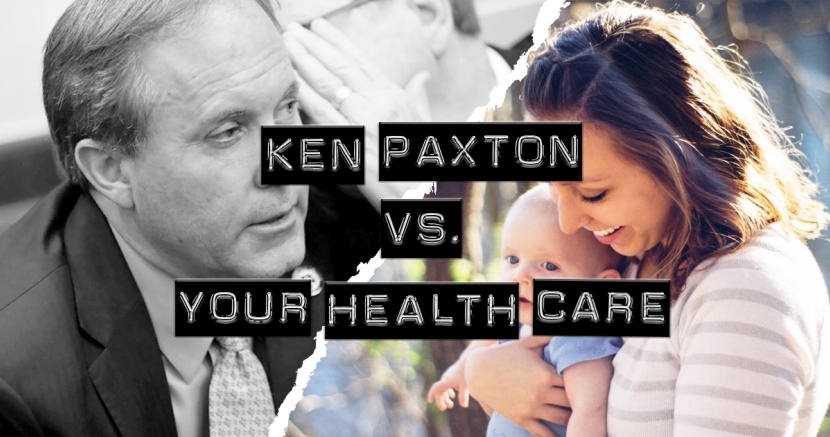 Texas Attorney General Ken Paxton is leading the legal charge to strip the most important safeguard of the Affordable Care Act—protections for pre-existing conditions.

Paxton, who is indicted for securities fraud, and 19 other Republican attorney generals have filed suit over the core protections of the ACA. The ramifications of this lawsuit will affect every Texan and could wreak havoc on the entire health care system.

According to the Kaiser Family Foundation, nearly 4.5 million children and adults in Texas have a pre-existing condition that, if Paxton gets his way, would be without insurance coverage. But Paxton’s reckless behavior has ramifications far outside of Texas with more than 52 million Americans falling into the same category.

Those with pre-existing conditions like cancer, asthma, MS, and even being pregnant will essentially be locked out of our health care system.

No one wants to relive the days when you could be denied health care for being sick or go bankrupt just trying to stay alive. This case will, quite literally, be a life-or-death decision for Texas’ most vulnerable.

Under normal circumstances, the Justice Department would be called in to defend the standing law of the United States. This time they have, not so kindly, punted their commitment to the rule of law. In their place, Democratic attorney generals from across the country are stepping in to argue in defense of the ACA and the care it provides. As the California Attorney General noted to the Texas Tribune, “To roll back the clock and risk the health of millions of Americans is not only irresponsible, it’s dangerous.”

The Affordable Care Act is a common-sense solution that ensures Americans with preexisting conditions can receive the care they need—no exceptions. Why would Ken Paxton want to get rid of that?

For more information, read NPR’s coverage on the case.