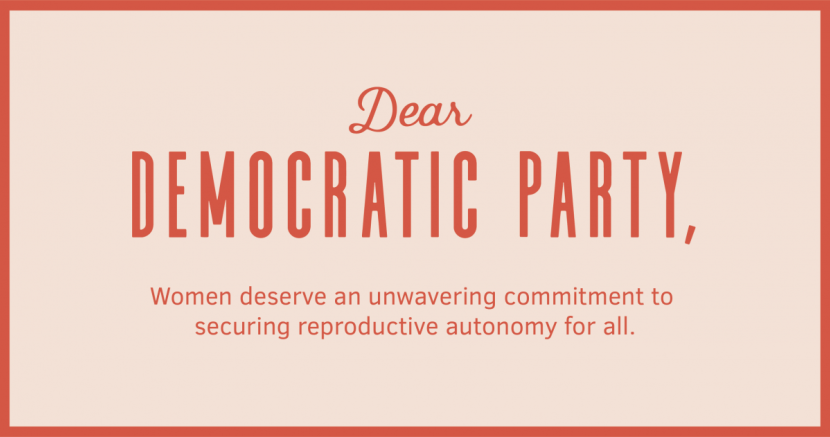 Dear Democratic Party: Abortion Is a Priority, Not a Bargaining Chip

An open letter to the DNC, Democratic elected officials, and state and local Democratic party organizations across the country.

Dear Members of the DNC, Democratic elected officials, and state and local Democratic party organizations across the country:

We are leaders in the progressive movement, fighting for change from state capitols across the country in red, blue and purple states. We have decades of collective experience in advancing the progressive agenda and have spent endless hours grappling with polling and  communicating with audiences on a huge array of issues. That’s why we are alarmed by the move by some to roll out the red carpet for anti-abortion Democratic lawmakers and marginalize the issue within Democratic and progressive policy agendas.

ProgressNow is a network of state-based advocacy organizations. As messengers for the broad Progressive movement, we reject any efforts to weaken, undermine, or hedge on public and proud support for reproductive rights including the right to abortion access for everyone in America. As advocates, we work year-round to inform and mobilize average Americans to stand up for a more progressive, equitable and just nation. We work closely with progressive partners and institutions that exist outside of the Washington, DC “bubble,” a place sometimes derisively referred to as “the field.” We are experts in communicating with these communities because we live here too.

Right-wing conservatives have made their intentions clear: a total ban on abortion and nothing less. That’s why Republicans continue to punish, shame and stigmatize women for their reproductive choices and to support laws that put women’s health at risk, limit access and create huge barriers for both providers and the people they serve, particularly low income women and women of color who have the least access to health care and abortion.

As progressives, it isn’t enough for us just to oppose Republican policies or promote reproductive rights when we are directly under attack. We must stand for a vision that speaks to fundamental values of autonomy, equity, liberty and self-determination and fight for an America where people can access the medical care they deserve based on their own judgment, including abortions. Trusting and equipping women to regulate their own reproductive lives is fundamental to achieving the kind of gender, race and economic equity that the Democratic Party articulates as its key values.

We know that progressive leaders in Congress have strong pro-choice voting records and support the party's platform supporting abortion access. But their commitment to Democratic values and to women as a key constituency rings hollow when these same leaders welcome anti-abortion lawmakers into the Democratic Party. We know from years of hard experience that when anti-abortion politicians have the opportunity, they pass anti-abortion laws that shame women, and stigmatize-even criminalize-abortion.

While these lawmakers may support other progressive policies, that doesn’t change the impact on women forced to pay the price for their refusal to support this most basic fundamental right. Support for other important issues like minimum wage, stopping climate change, health care for all, etc. doesn’t give anti-choice policy-makers a pass on abortion. Nor is it right that abortion is the only issue singled out for this 'big tent' treatment, marginalizing women, the biggest part of the Democratic base, within the very Party that is supposed to champion their rights.

As leaders in the progressive movement, we strongly caution the Democratic Party and its leaders about the dangers of abandoning core progressive values. Our first responsibility as Progressives and as Democrats is to fight for values shared by our own Party supporters, not to compromise our long-term priorities to pander to short-term thinking. For decades, a majority of voters in our country have supported the right to safe, legal abortions. According to Gallup, 71% of Democrats are pro-choice, the highest percentage in 17 years.

Today, as opponents of women’s rights and health are waging a full-fledged war on women, progressives ought to redouble commitment to the values we know will create a more just and progressive society. Rather than accommodate policy-makers who will support the very same attacks on women that we spend so much time fighting, we must protect access to abortion as a reproductive right contained in the Democratic Party Platform. Lip service won’t suffice.

Women deserve an unwavering commitment to securing reproductive autonomy for all, regardless of income level or geography, so that every person in our nation has the right to decide if, when and how to start a family. It’s not just the right thing to do, it is our responsibility as progressives.