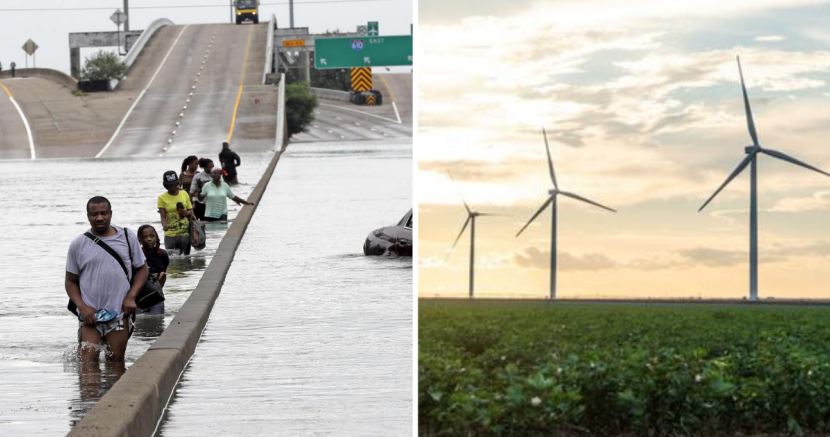 Abby Springs
We need bold, progressive plans that can fix our planet and address environmental racism.

Last week, for the first time on record, the Gulf of Mexico saw two hurricanes at the same time: Hurricane Laura, a category 4, and Hurricane Marco. Last year, Hurricane Harvey set a record for the wettest storm on record in the U.S.

With the COVID-19 crisis commanding our attention, it’s easy to forget that climate change looms in the background. But for the communities most impacted by climate change and coronavirus, solutions can’t wait. Both of these crises impact communities of color the most, and BIPOC Texans have already been experiencing the effects of pollution and global warming for decades.

It’s time to embrace progressive legislation that commits to bold green energy solutions and addresses the disproportionate impacts of climate change on Texans of color.

Climate change is a problem that affects all of us, and we need to work together to solve the ever-worsening climate crisis. But historic, systemic racism means that climate change hits communities of color the hardest, and BIPOC Texans will feel most of its effects over the next few decades.

East Texas, where Hurricane Laura made landfall, has a reputation as the intersection of pollution and racial segregation. It’s the home of major fossil fuel and chemical centers, which BIPOC Texans are most likely to live near, while many white Texans commute for work. It’s also especially vulnerable to hurricanes, global warming, and decreasing coastlines.

When Hurricane Laura touched down last week, it hit some of those majority BIPOC communities the hardest. That’s a pattern in our state — Hurricane Harvey disproportionately impacted Texans of color as well. A year after Hurricane Harvey, 27% of Hispanic Texans who were affected reported that their homes were still unsafe to live in, compared to 20% of Black victims and 11% of white ones.

Texans of color are also more likely to live near major pollution centers, which has irreversible consequences for health and safety. Poor air quality increases the chance of respiratory disease. Toxic chemicals can cause cancers. And early exposure to pollutants can cause asthma and decreased life expectancy in children.

We’re seeing those health impacts today, as Black and brown Texans die of COVID at higher rates than white Texans. Respiratory disease caused by environmental inequalities is a likely factor.

Thanks to centuries of racism, segregation, and unequal development that placed major pollution sources around Black and brown neighborhoods, it’s clear that the effects of climate change are already disproportionately affecting Texans of color. So where do we go from here?

By embracing progressive climate action,  the policies that come with it, and the future of the energy industry, Texas can become a world leader in environmental reform, all while addressing climate injustice and creating thousands of new jobs.

Texas has enormous potential for clean energy. We can produce more wind power than any other state in the country, and new public transportation between our major cities can reduce automobile emissions. Texas also has the resources to invest in solar and hydroelectric power in a big way. Plus, the transition would come with investment in job training and building new skill sets for Texans across the state, many of whom currently work in oil and gas. Clean energy and a strong Texas economy are not mutually exclusive, as much as Republicans want you to believe they are.

We also have to address the racial inequities of climate change. That means ensuring that BIPOC Texans will have access to job training and education, and that communities of color will be included in implementing any plan. We also need to make sure that resources are directed towards helping Texans recover from harms caused by climate injustice.

Progressive environmental reform is possible in Texas — 74% of Texas voters agree that we need to take action on climate change. This November, we can take a huge step toward tackling the issue by electing Chrysta Castañeda to the Texas Railroad Commission. The position is in charge of environmental issues in our state, and Castañeda is committed to protecting both Texans and our planet while making sure Texas is a leader in the 21st century energy economy. Make sure you’re registered to vote — and vote early!

We don’t have time to wait to address climate change. Nearly every Texan has already experienced once-in-a-lifetime storms, 500-year floods, or record-breaking temperatures. Every year we delay on bold, progressive action is another year closer to the point when climate change becomes irreversible.