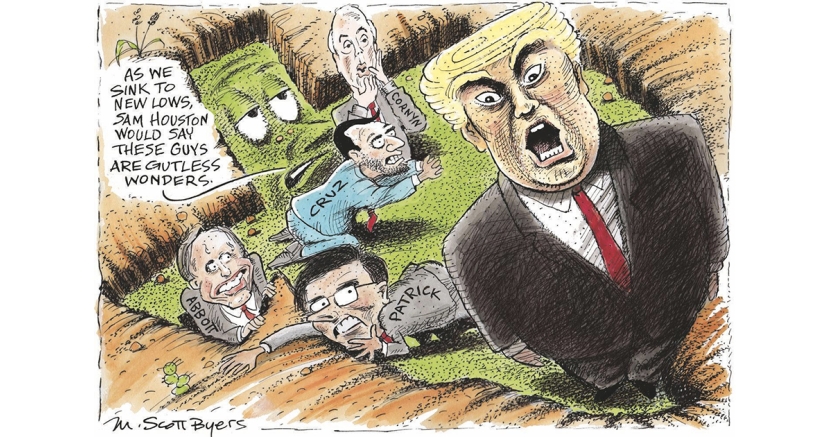 Celebrate Sam Houston’s courage. We could use more of it.

Illustration by M. Scott Byers
On this Texas Independence Day, there is reason for celebration. More and more citizens are engaging in politics, changing the dynamics across the state.

There is no better example of Texas’ greatness than Sam Houston, the first president of the Republic of Texas and the first governor of the state of Texas.

No, I’m not speaking of his success as the general who led the revolution against Mexico. I’m speaking of his courage in opposing Texas secession in 1861, an act that got him tossed from the governor’s office.

Houston refused to sign a loyalty oath to the Confederacy, saying, “Fellow citizens, in the name of your rights and liberties, which I believe have been trampled upon, I refuse to take this oath.”

It’s worth pausing on Texas Independence Day to consider Houston’s courage and leadership. Where is that kind of leadership today?

We have something to measure it by, as President Donald Trump represents a threat to our “rights and liberties” similar to those Houston saw in the Confederacy and Civil War.

So, how do the U.S. senators from Texas stand up against Houston’s actions? Sen. Ted Cruz, who during the 2016 presidential campaign called Trump a “sniveling coward,” emerged as a staunch Trump loyalist after Trump became president.

Like Cruz, Sen. John Cornyn refused to challenge Trump on a variety of issues, including separating immigrant children from their mothers.

I think it’s fair to assume that neither Cruz nor Cornyn would sacrifice his job by going against his party. Nothing in their actions indicates they would.

The same is true of Gov. Greg Abbott and Lt. Gov. Dan Patrick, who both cowed before Trump’s radical policies.

Now, some might argue that they simply agree with those actions and policies. Cruz certainly didn’t agree with Trump’s suggestion that Cruz’s father played some role in the assassination of John F. Kennedy. Cornyn had never advocated for the kinds of attacks on the rule of law that Trump has mounted.

In fairness, it’s not just Texas. It seems like politicians everywhere these days are measured by only one standard: Can they be elected and re-elected? Those who take a stand that costs them election are seen as losers. No one wants to be a loser.

Still, on this Texas Independence Day there is reason for celebration. More and more citizens are engaging in politics, changing the dynamics across the state. Ultimately, this growth in citizen action will either lead to changes in leadership or force the current leadership to act courageously.

Let’s look at a couple of examples of the kind of leadership the future demands. The Texas economy has greatly benefited from fossil fuel resources, but looking ahead, that resource will become more of an economic fossil than a dependable driver of the state’s economy.

Even today, courageous entrepreneurs are developing a thriving wind and solar energy industry in the state. They employ about 200,000 Texans. Political leaders need to catch up.

Radical changes in energy consumption and a growing population will increase demands on our transportation infrastructure. Politicians have to act more courageously and pursue solutions like high-speed rail and local commuter rail.

Let’s hope they do so in the spirit of Sam Houston, a political leader who saw that doing right was far more important than serving his own interests.