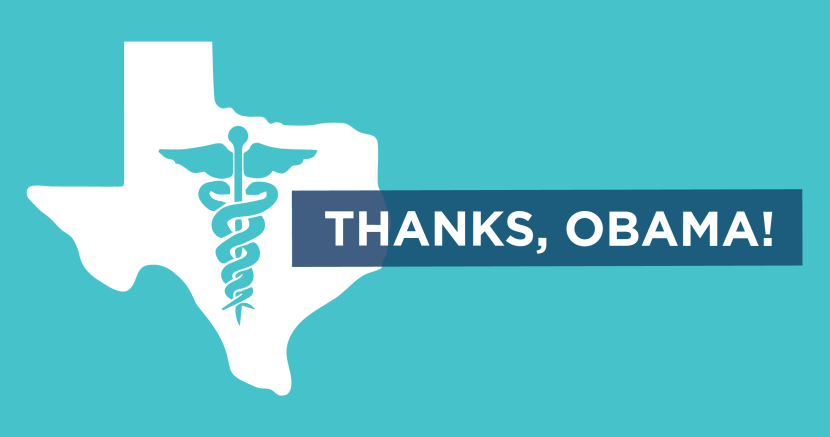 In other words - thanks, Obama!

Texas' rate of uninsured people fell to 17.1 percent in 2015 as part of a steady decline in the share of uninsured residents following the implementation of the Affordable Care Act, according to new Census estimates released Tuesday.

But the progress we've made since ACA provisions went into place is undeniable:

That 5-percentage point improvement, from 22.1% down to 17.1%, is unprecedented. From 1999 to 2013, Texas never saw a single percentage point decrease in the uninsured rate; in fact, some years it got worse.

That Texas is getting so much better so much faster is exclusively due to the actions taken by President Barack Obama to pass and protect the Affordable Care Act.

Anne Dunkelberg, Associate Director with the Center for Public Policy Priorities, released the following statement about the latest figures:

"We are really pleased to see that in 2015, the Affordable Care Act continued to boost health insurance coverage in Texas. But too many hard-working, low-income Texans are still left uninsured, while their better-off neighbors can get discount health coverage. And all Texans are losing out on the even larger health benefits and cost savings that most states – including conservative states – have gained by expanding coverage using federal Medicaid dollars."

Unfortunately, those gains are at risk. Texas is currently debating how to replace one-time temporary funds from the federal government that are likely to go away by December 2017. Part of that conversation involves how we increase coverage for the uninsured.

Yet, during an interim hearing at the Texas Legislature today, here's what the Senate Health & Human Services committee heard:

Thankfully, President Obama was here to start making this better these past few years.

And the numbers today are a reminder at what's at stake when we think about who to vote for in the 2016 election.