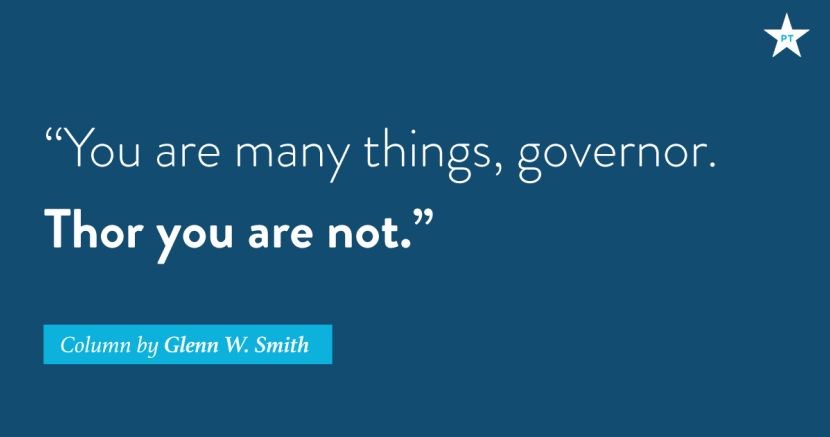 Of Bigot Burgs and Shock-Jockery

An unseemly pattern is emerging among some Republican leaders. Why are all their targets people of color?

The Russian military is advancing in Ukraine. President Donald Trump’s son-in-law, Jared Kushner, a real estate wheeler-dealer, helps his daddy-in-law approve an ill-conceived and impetuous military adventure in Yemen that ended in tragedy. One hundred thousand visas have been revoked by the president’s unconstitutional Muslim ban.

For instance, Gov. Greg Abbott is threatening to hammer Travis County for defying his order to create Bigot Burgs or non-sanctuary cities where the racial profiling by local law enforcement of brown-skinned people is mandated by law. After hours of testimony, nearly all of it from citizens opposed to Bigot Burgs, a Senate committee approved it this week.

I know there’s a race to the bottom among right-wing Republicans, each of them scared that another will get a racist’s vote that rightly belongs to them. It’s a sad thing to see, in part because it so very scaredy-cat and they know it. That’s why Abbott speaks of his hammer. See, I’m a tough guy after all, he says.

As lieutenant governor, Patrick may wield more power, but he’s acting like a squirrely student council president trying to mandate longer skirts on the cheer leaders. As an early sports shock-jock on Houston TV, Patrick earned a lot of ridicule from that city’s athletes, sports teams and fans. If shock-jockery hadn’t become the pop culture phenom it is (will there be a Pulitzer Prize in that category soon?) he’d be earning more ridicule today as well.

Yes, these are the times of shock-jockery in places high and low. Trump is the Clown King of shock-jockery. He, too, pretends to a gravitas he doesn’t possess. Admit it: doesn’t he seem woefully out of place in those pictures from the Oval Office? He looks like he can’t figure out where the corners went.

Just this morning the Clown King took credit for the creation of 227,000 new jobs that were measured in the weeks before he took office. Soon he will brag about landing Americans on the moon, assuming he’s sure the moon landing wasn’t fake news.

Some of these developments are distractions, a subset of them even entertaining distractions. But others that seem lighter than air are actually dangerously weighty. For instance, Trump’s recent threat to send troops into Mexico if that country’s army doesn’t halt the flow of drugs into America.

Trump said it, then later said he was just joshing. He wants us to put it in the category with Bill Maher’s line, “I kid, I kid.” Except Maher is just a comedian. Trump is the president and he could order troops into Mexico. So, there’s that.

But let’s return to Abbott and Patrick. (Heavens, I actually typed Costello after Abbott. Fixed now.) They are quite serious about creating their Bigot Burgs. But how can we take them seriously when Abbott, claiming he’s doing it for reasons of public safety, punishes Travis County by withholding funds for public safety? Think, Governor Abbott. Nose, face and all that.

And, seriously, governor, you actually said you’re going to “hammer” the county? You are many things, governor. Thor you are not.

At first it was a bit refreshing to hear Trump had belittled the prime minister of Australia? Why? Because Prime Minister Malcolm Turnbull is white. Trump and company finally desegregated the list of targets.

From the Muslim Ban to the Border Wall to Bigot Burgs, all of the other objects of their fear are people of color. And I said “at first” because it soon became apparent that Trump’s contempt for Turnbull involved, yes, brown-skinned refugees. Oh well.

For fun, let’s add Kellyanne Conway’s hilarious invention this week of the “Bowling Green Massacre.” That dark fantasy was, it is assumed, a reference to an old and never-confirmed story about some threatening Muslims in that beautifully named Kentucky town.

Discounting the fact that Steve Bannon, who at the very least sympathizes with white nationalists, is Trump’s top White House aide, we might consider this color line to be an accident, an unintended consequence of the policies of men of good will. We might.

On the other hand, considering that federal courts have found multiple time that Texas Republican officials intentionally discriminated against people of color, we might recognize a certain pattern to their behavior. I kid. I kid.