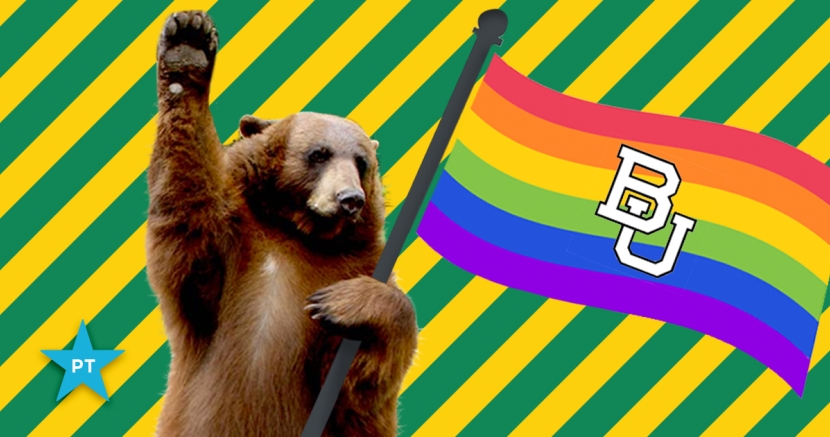 Wesley Story
News flash Baylor, queer people exist! And they comprise your student body. Either get with the times, or you’ll be a university of the past.

As a gay student about to graduate college, I cannot imagine what my time at the University of Texas would have been like without the queer organizations we have on campus.

Representation is important. And for many queer students, college is the first time in our lives we can be our true selves, without fear of retaliation from family or closed minded communities in our home towns.

At Baylor University, this is not the case.

Now, I would never make the claim that my university is perfect. In fact, UT has faced ongoing criticism for its feigned inclusivity. This is not a “my school is better than your school” argument. This is about the rights of queer people to live openly and be treated with the same respect and dignity as everybody else. This is about the historically unjust treatment of LGBTQIA+ individuals in Texas.

UT Austin, Baylor, and other universities across the state are just as at fault for this shameful history. But while some are actively working to make the situation better, Baylor is choosing to remain behind the times. With the slew of embarrassing incidents coming from the Waco university in recent years, you would think they would’ve learned their lesson by now. Clearly, they have not.

As per their Student Policies and Procedures, Baylor does not currently allow LGBTQIA+ student organizations to officially form, host events, or organize on campus.

Baylor students have recently taken action to change Baylor’s discriminatory policies. A petition with over 3,000 signatures is calling for Baylor to allow LGBTQIA+ students to organize on campus.

Officially, the university’s Statement on Human Sexuality describes “marriage between a man and a woman as the biblical norm.” The statement also says that “heterosexual sex outside of marriage and homosexual behavior” are deviations from this norm and it is expected that “Baylor students will not participate in advocacy groups which promote understandings of sexuality that are contrary to biblical teaching.”

As a result of this, Baylor has refused to recognize LGBTQIA+ organizations like Gamma Alpha Upsilon, an unofficial Baylor student organization dedicated to providing a community for LGBTQIA+ students and promoting conversations about issues related to sexual and gender identity.

I have good friends and family members that have attended Baylor, and I can confidently say the university’s discriminatory practices are not representative of their beliefs or Christian values.

The university is giving their student body a bad reputation, when many of them would support having LGBTQIA+ groups on campus as evidenced by the LGBTQ inclusion bill that Baylor’s student government passed in April.

The ball is in Baylor’s court, but the Big 12 could help.

This seems like a good time to mention Baylor’s standing in the Big 12.

The reality is, being a part of the Big 12 conference is a privilege, not a right. Baylor’s policies are discriminatory, and by allowing them to continue to be a part of the conference, the Big 12 is legitimizing their homophobic and transphobic practices.

After Baylor’s sexual assault scandal and following a 21-month review, the Big 12 fined the school $2 million for “reputational damage to the conference.” Further actions should be taken by the conference against the university until they fix their antiquated LGBTQIA+ policies.

Although Baylor is a private institution, this discrimination should not be tolerated. We call on the Board of Regents to rethink this outdated practice and meet with the LGBTQIA+ students they serve.